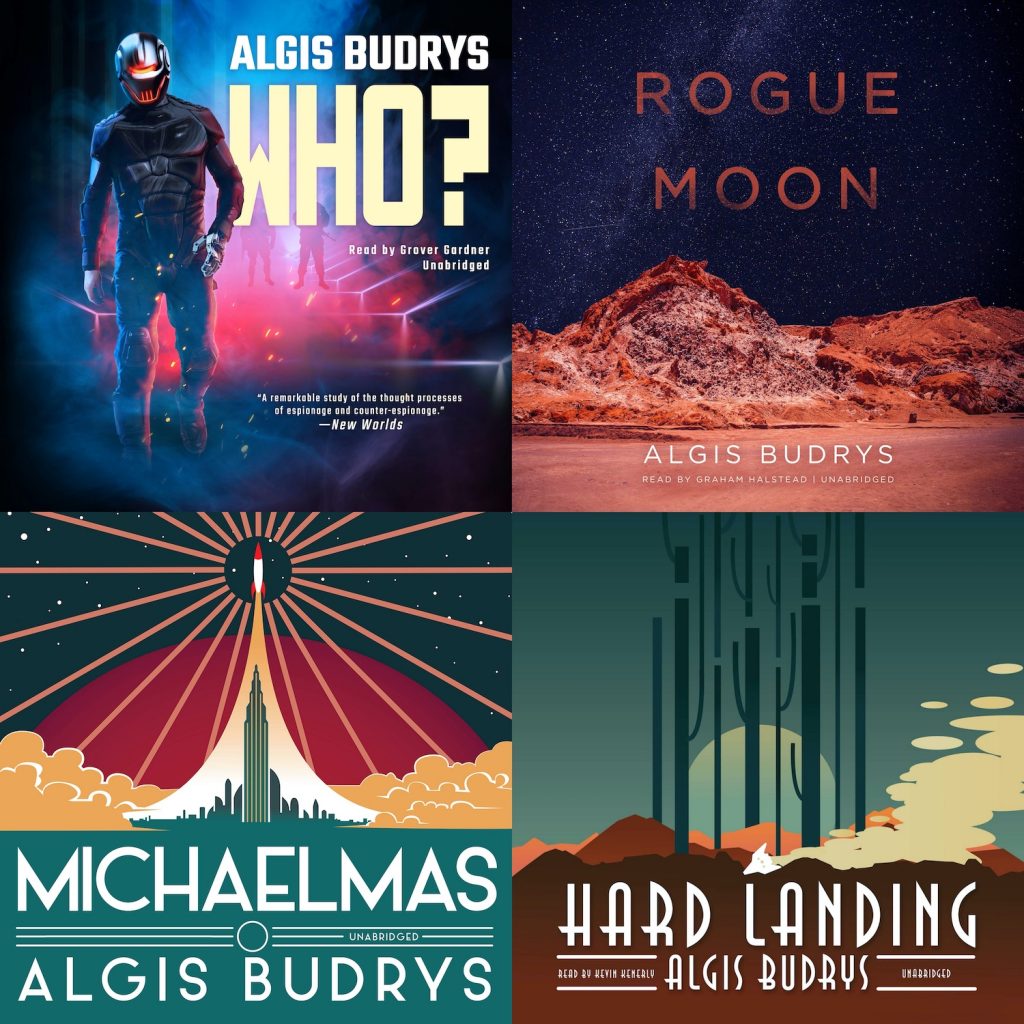 This week, we wanted to draw your attention to four classic sci-fi novels by Algis Budrys: WHO?, ROGUE MOON, MICHAELMAS and HARD LANDING. Each of these is available as an audiobook, published by W. F. Howes. Here are some more details… 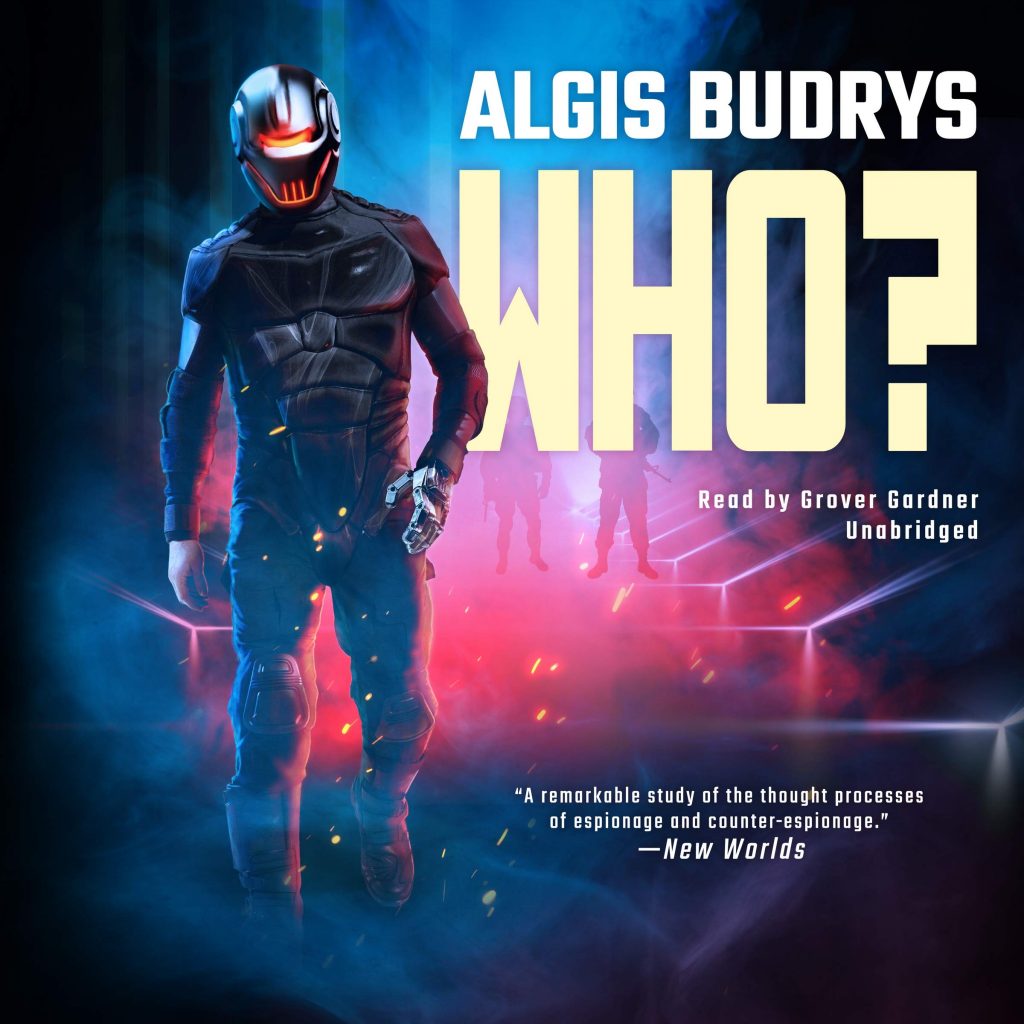 WHO? was first published in 1958, and was a finalist for a Hugo Award for Best Novel (1959). It was also nominated for a BSFA 50th Anniversary Award in 2007. In 1974, it was adapted into a movie starring Elliott Gould. Here’s the synopsis…

Set against a backdrop of Cold War paranoia, this futuristic novel about identity and technology is “one of the unrecognized classics of SF” (Locus).

East and West have fused into separate superstates known as the Allied National Government (ANG) and the Soviet International Bloc (SIB). As the Cold War rages, brilliant scientist Lucas Martino works on a top-secret project known only as K-Eighty-eight that could alter the balance of world power. The project goes horribly awry at an Allied research facility near the Soviet border, and Martino is abducted.

After several months of tense negotiations, he returns severely injured from the lab explosion, and under pressure from America, undergoes extensive reconstructive surgery. He has a mechanical arm. His polished metal skull-a kind of craniofacial prosthesis-contains few discernible features. Several of his internal organs are artificial. While his fingerprints are identified as belonging to Lucas Martino, they could be the result of transplant. Is he the real Martino? Or a technologically altered impostor sent by America’s enemies for the purpose of spying and infiltration? Tasked with uncovering the truth, ANG Security Chief Shawn Rogers makes some shocking discoveries.

Narrated in chapters alternating between Rogers and Martino, Who? poses existential questions about the human condition. 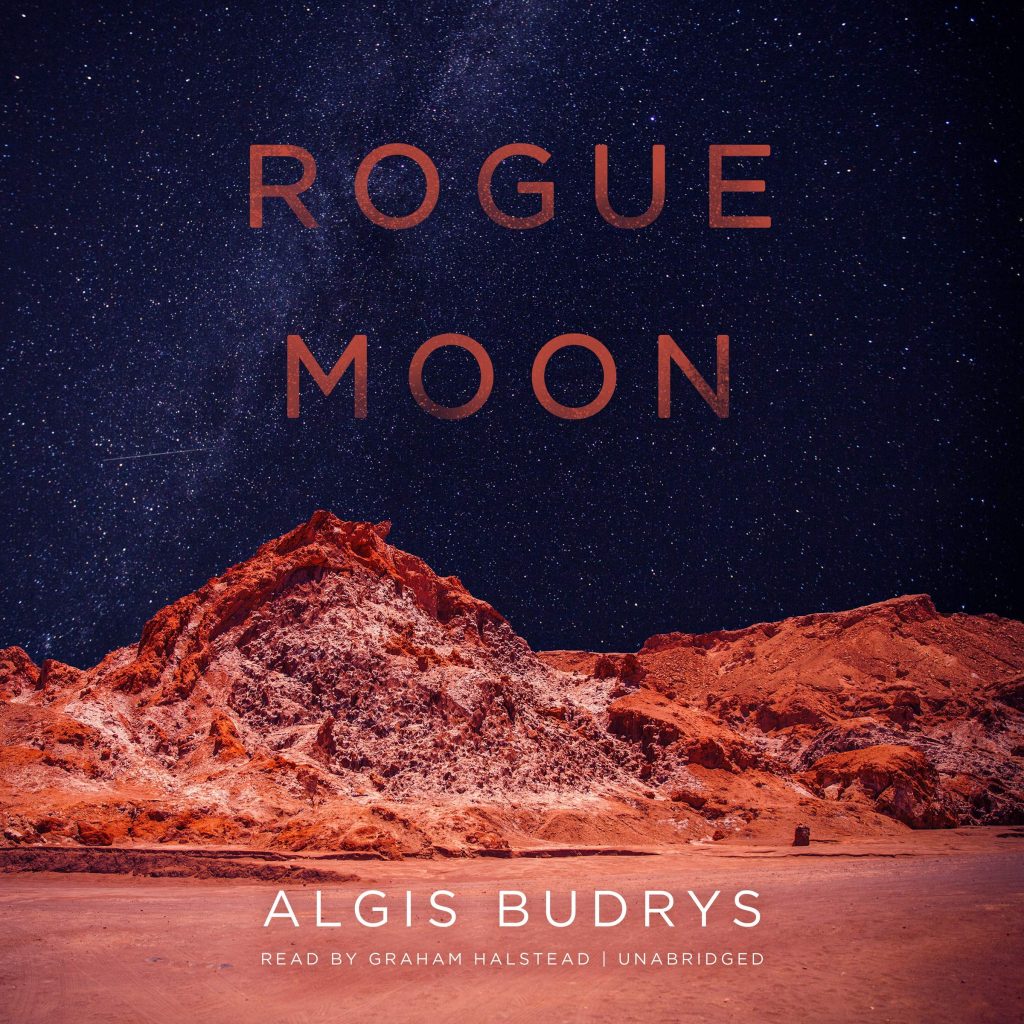 Budrys’s acclaimed ROGUE MOON, first published in 1960, was a Hugo Award Nominee for Best Novel. It is also available as a SF Masterwork edition. Here’s the synopsis…

A monstrous apparatus has been found on the surface of the moon. It devours and destroys in ways so incomprehensible to humans that a new language must be invented to describe it and a new kind of thinking to understand it. So far, the human guinea pigs sent there in hopes of unraveling the murderous maze have all died terrible deaths — except the last, now on suicide watch. The ideal candidate won’t go insane, even as he feels the end approaching. And now they think they’ve found their man.

Al Barker has already stared into the face of death-he can handle it again. But Barker won’t merely have to endure the trauma of dying: he will have to endure it over and over again-mentally linked to an ongoing series of duplicates of himself created and sent to the Moon by matter transmission-until the artifact reveals its secret.

With a cast of fascinating characters taking center stage, Rogue Moon is a rare thriller that doesn’t just make you sweat-it makes you think. 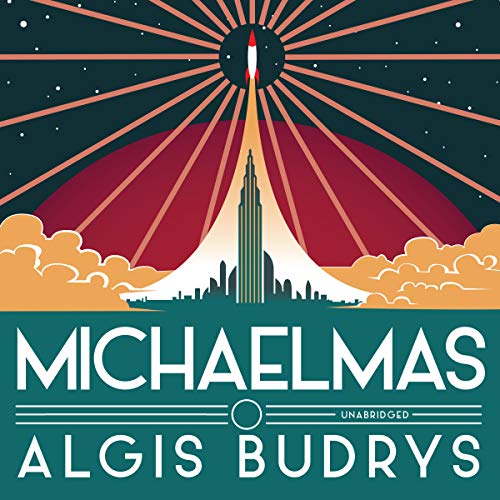 One of the world’s wealthiest and most influential men, journalist Laurent Michaelmas lives in a penthouse overlooking New York City’s Central Park with his superintelligent computer, Domino. He attained his fame and power after hacking into the worldwide computer network. He then went on to use his unique gifts to create a version of the UN that would ensure global peace. In short, he and Domino secretly run the world. But now he has reason for concern.

A Swiss doctor has cured an astronaut believed to have vaporized in a shuttle explosion during an expedition to the outer planets of the solar system. Suspecting that something extraterrestrial is behind this miraculous recovery, Michaelmas uses his immense influence to launch an international investigation. Are there really aliens in their midst? Is the resurrection of a dead man an attempt to cancel history and destroy the world’s precarious balance of power?

Published less than a decade into the internet era, this remarkable science fiction novel foreshadows many of the world’s technological advances.

HARD LANDING was published in 1993, after the author took a bit of a break from longer fiction. It was nominated for Nebula and SF Chronicle Best Novel awards; and also for the Kurd Lasswitz in Germany, for Best Foreign Novel.

A science fiction adventure told from the point of view of aliens who crash-land on Earth and must assimilate in secret — until their human cover is blown Budrys’s final novel opens with the report of a man found electrocuted on suburban train tracks in Shoreview, Illinois. Neville Sealman appeared to be just another commuter, but after his tragic death, no one comes forward to claim his body. And a routine autopsy reveals some disturbing physiological anomalies. Then a spaceship is unearthed in a New Jersey swamp. It’s the stuff of tabloids-except it’s all true.Years earlier, a starship crash-landed on Earth. Its passengers, human in appearance, were forced to go their separate ways in an alien world. No one knows that these otherworldly visitors have been living among the human race-but now their cover could be blown.

Told in the form of an investigation reconstructed through direct and indirect witness testimony, Hard Landing takes the listener into the minds of its four protagonists as they struggle with the far-reaching ramifications of discovery. This is a suspenseful and revelatory novel about the elusive, ever-changing nature of identity.

These novels are also available as eBooks, published by Open Road Media, joined by two others: FALLING TORCH and THE FURIOUS FUTURE.