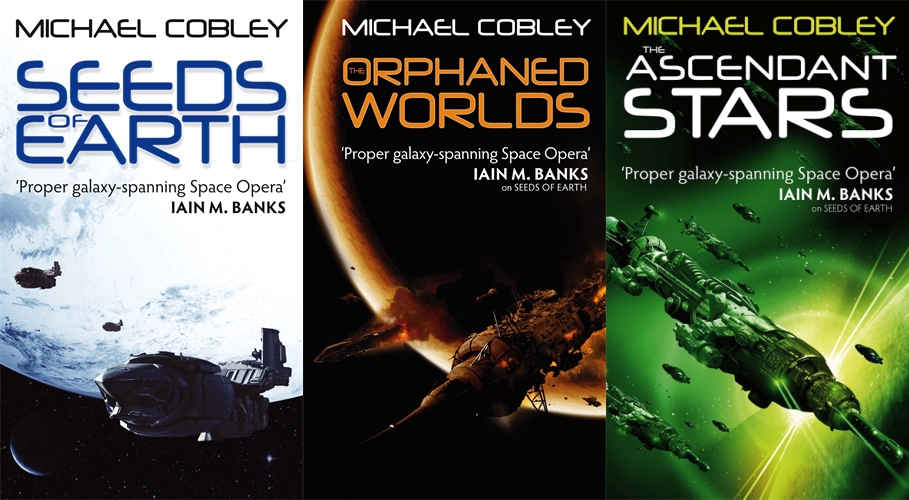 Michael Cobley‘s debut novel, SEEDS OF EARTH, was published by Orbit Books in 2009, in the UK and North America. The first novel in the Humanity’s Fire trilogy, it was met with a flurry of great reviews and praise, and sci-fi fans on both sides of the Pond have embraced the series. In case you haven’t had a chance to check out the series yet, here’s the synopsis for SEEDS OF EARTH…

The first intelligent species to encounter mankind attacked without warning. Merciless. Relentless. Unstoppable. With little hope of halting the invasion, Earth’s last roll of the dice was to dispatch three colony ships, seeds of Earth, to different parts of the galaxy. The human race would live on… somewhere.

150 years later, the planet Darien hosts a thriving human settlement, which enjoys a peaceful relationship with an indigenous race, the scholarly Uvovo. But there are secrets buried on Darien’s forest moon. Secrets that go back to an apocalyptic battle fought between ancient races at the dawn of galactic civilisation. Unknown to its colonists Darien is about to become the focus of an intergalactic power struggle, where the true stakes are beyond their comprehension. And what choices will the Uvovo make when their true nature is revealed and the skies grow dark with the enemy?

The Humanity’s Fire series has since expanded to include a pair of stand-alone novels. All five novels are published by Orbit, and are out now…

The series has been published quite widely in translation, and is also available as audiobooks. 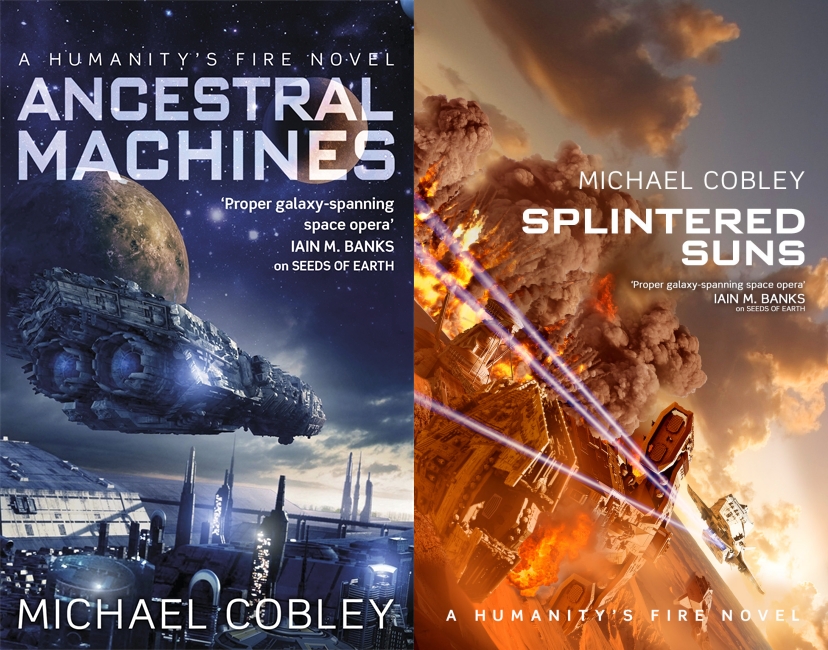 Michael was kind enough to write down some thoughts about writing the series. Here’s what he had to say…

The thing I’m asked most about the Humanity’s Fire trilogy is the sheer density of people and places and concepts and events and… well, you get the picture. In pondering this my thoughts usually zero in on something that Bruce Sterling said about his book, Schismatrix, namely that he wanted to distill the weak beer of standard, mainline space opera down into a potent, hi-octane liquor. Now, that seemed like a worthy ambition, writing something strong enough to blow through reader preconceptions like a quick blast in the face from a wind-tunnel. That said, that was really my assessment post-opus, rather than anything that was part of the blueprint from the outset. The only answer as to why the Humanity’s Fire trilogy is the way it is… is that it was the only way I was able to do it at the time.

There’s an old writer’s anecdote, from a worldly-wise author who was tutoring a class of would-be scribblers, one of whom asked him, straight out, exactly how to write the perfect novel. The WW-author knew the answer to that one, because of course he was wise about the world of writing, and he said — “It’s quite simple — all you have to do is make yourself perfect, then just write naturally!”

That goes to the heart of it, I think. Elements of your own psyche and your core perceptions of the world will surely present themselves in some form in your writing… mostly. Yet when I came to write ANCESTRAL MACHINES I tried to allegorise some of my broad perceptions of Our Times, in the sense that the artificial solar system (and its grid of worlds) was an analogy of the world we live in, where warfare is structured as a tournament to suit the interests of the highest rulers, the Gun-Lords, and where entire worlds – stolen from their home solar systems — can end up as poisonous ruins whose populations are reduced to brutish armies forced to strive against those from other stolen worlds. I even showed a kind of a parody of ruthless factory production-line methods in one of the scenes, yet I never heard any reviewer or reader remark upon any of this. But that’s okay, I guess, as didactics are not the point of why I write — communicating some kind of truth or understanding is an essential part of meaningful fiction, but the primary goal is Telling The Story, and serving the storytelling ends. And that’s what I will always strive for. 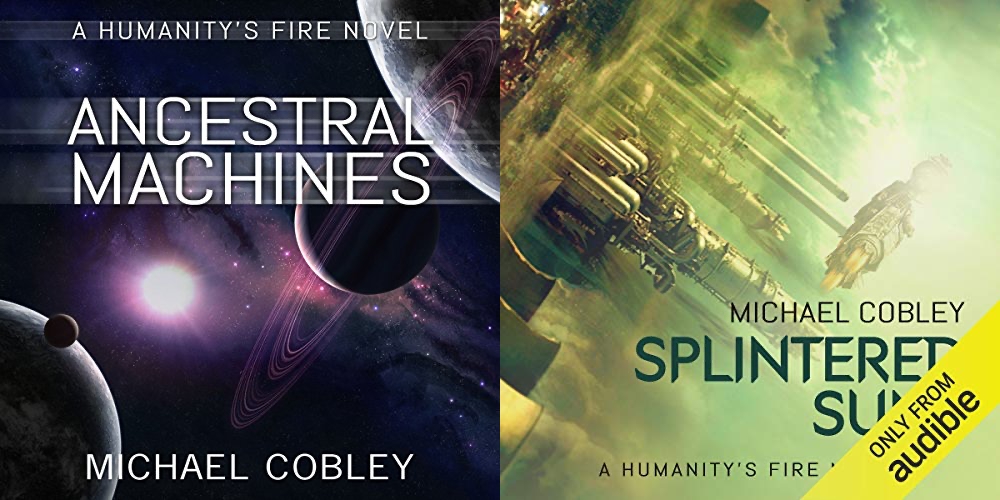 ‘… a complex, finely detailed thriller-cum-space opera… SEEDS OF EARTH has everything: well-realised extraterrestrials, scheming artificial intelligences, set-piece space battles and bizarre technology from the dawn of the galaxy. The first book of the trilogy is also a convincing portrayal of political machinations and the plight of individuals caught up in events beyond their comprehension.’ — Guardian

‘Cobley’s debut, first published in the U.K. in 2009, is a well-constructed space opera with a sense of vast scope, populated with an array of beautifully differentiated intelligences both organic and artificial… this is a thick and satisfying 10-course meal of starchy pageantry, meaty characters, bitter losses, and sweet romance.’ — Publishers Weekly on SEEDS OF EARTH

‘The story is huge, complex and moves between its varied cast with assured purpose… a tightly plotted, action packed epic that leaves you wanting more.’ — SciFi Now on SEEDS OF EARTH

‘Fast and exciting… an excellent middle book in the trilogy, expanding on SEEDS OF EARTH and setting everything in place for a thrilling conclusion’ — Waterstone’s Book Quarterly on THE ORPHANED WORDS

‘Few writers attempt the tricky crossover from high fantasy to hard science fiction. Cobley’s first books were the Shadowkings series; with the Humanity’s Fire science fiction trilogy, he has successfully transported his dark visions to the wide-screen baroque sub-genre… Cobley combines a fast-paced plot of great scope and complexity with the convincing smaller-scale stories of the human protagonists. He’s also skilful at explicating the knotty machinations of political intrigue. Space opera has never been in more capable hands.’ — Guardian onTHE ORPHANED WORDS

‘Cobley writes energetic space opera, rarely dallying with sentiment and mostly assaulting the reader with exotic locations and sudden skirmishes. There are joyous moments of invention but overall there’s too much going on… Fortunately, as the saga progresses, THE ORPHANED WORLDS begins knotting some of the threads together – it still feels like an over-shaken can of fizzy diet Banks…’ — SFX

‘Cobley’s first trilogy was fantasy and his second hard SF, but what they share is a dark vision of humanity pitched against vast forces; the plight of strong individuals caught up in titanic struggles and fighting for what they see as a just cause. THE ASCENDANT STARS is the culminating book in the Humanity’s Fire trilogy, a space opera of mind-bending depth and scope which sets complexly thought-out alien races and chilling cyborg armies against humans riven by competing political philosophies and agendas. The result is a marvellously readable examination of people under extreme stress, a convincing depiction of startlingly alien aliens, and a mature political analysis often lacking in the genre. Cobley expertly juggles multiple plot-lines and brings them to thematically satisfying conclusions while providing the landmark trilogy with a thrilling finale.’ — Guardian

‘All in all, this is an excellent space opera, full of imagination and invention. The human characters are mostly likeable and the inhuman ones send a shiver down the spine, especially the ones with machine parts and the parasites. There is a pleasing familiarity to much of it for those well-read in the genre and even for those who only do their Science Fiction on film and television. The writing is crisp and clear throughout and it all leads beautifully to a glorious conclusion… I highly recommend the series. Michael Cobley has added a fine piece of work to a grand tradition and I think old E.E. ‘Doc’ Smith is lying tranquil in his grave.’ — SF Crowsnest on THE ASCENDANT STARS

‘There’s a grand tradition within SF of galaxy-wide, aeon-spanning scenarios, with escalating magnitudes of scale and concomitant ramping up of narrative tension, and Michael Cobley’s Humanity’s Fire series is the latest example… Cobley excels at presenting his thoroughly lived-in future with a slew of technological marvels and an engaging cast of characters.’ — Guardian on ANCESTRAL MACHINES

‘Cobley wastes no time in flaunting his honed, merciless skills… Cobley is taking the techniques pioneered by van Vogt, Charles Harness and other bold visionaries and ramping them up for a purely twenty-first-century kind of SF that others such as Paul McAuley, Iain Banks and Ken MacLeod have hitherto essayed… Cobley takes all these characters, plus others, and pushes them along a non-stop, unrelenting, madcap set of adventures. The brio and joy of this storytelling is contagious. Here is a space opera which unashamedly honors the roots of the genre while expanding the remit of the mode… A predominant feature of Cobley’s storytelling is an exuberant humor, a kind of high spirits that is exactly the opposite of so much of the ultra-serious gravitas seen in other space operas… If you want a rousing space adventure full of sense of wonder that is also ideationally challenging, then you need look no further than ANCESTRAL MACHINE.’ — Locus