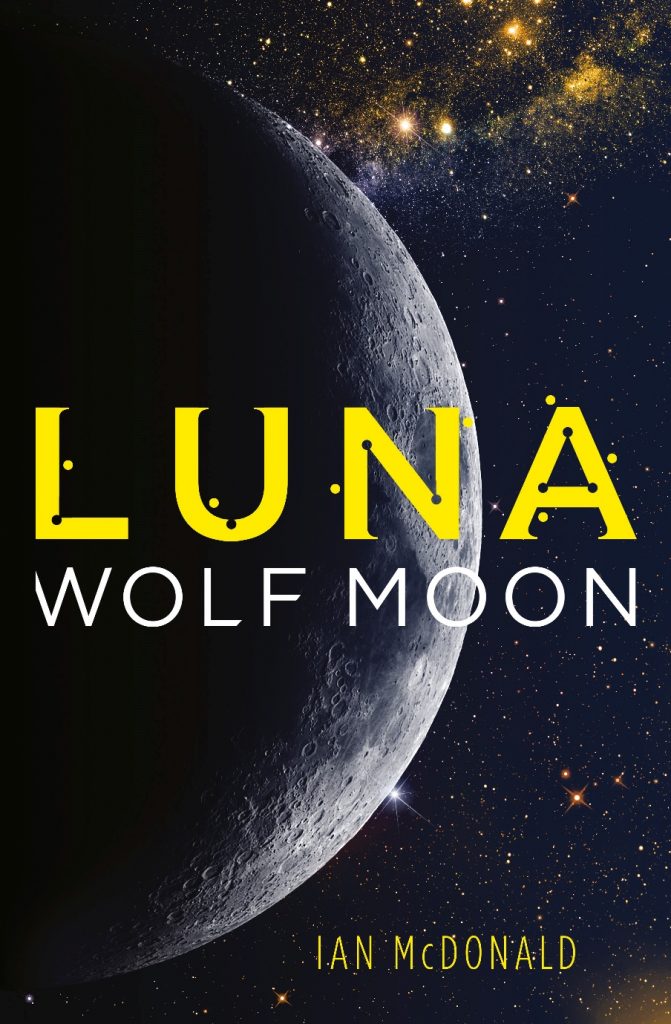 The highly-anticipated sequel to NEW MOON, Ian McDonald‘s LUNA: WOLF MOON is out today in the UK! Published by Gollancz, here’s the synopsis…

A Dragon is dead.

Corta Helio, one of the five family corporations that rule the Moon, has fallen. Its riches are divided up among its many enemies, its survivors scattered. Eighteen months have passed .

The remaining Helio children, Lucasinho and Luna, are under the protection of the powerful Asamoahs, while Robson, still reeling from witnessing his parent’s violent deaths, is now a ward — virtually a hostage — of Mackenzie Metals. And the last appointed heir, Lucas, has vanished of the surface of the moon.

Only Lady Sun, dowager of Taiyang, suspects that Lucas Corta is not dead, and more to the point — that he is still a major player in the game. After all, Lucas always was the Schemer, and even in death, he would go to any lengths to take back everything and build a new Corta Helio, more powerful than before. But Corta Helio needs allies, and to find them, the fleeing son undertakes an audacious, impossible journey — to Earth.

In an unstable lunar environment, the shifting loyalties and political machinations of each family reach the zenith of their most fertile plots as outright war erupts.

WOLF MOON is due to be published by Tor Books in North America on March 28th. NEW MOON is also published in the UK by Gollancz, and in the US by Tor Books — it has also been published widely in translation (see below for a selection of covers). 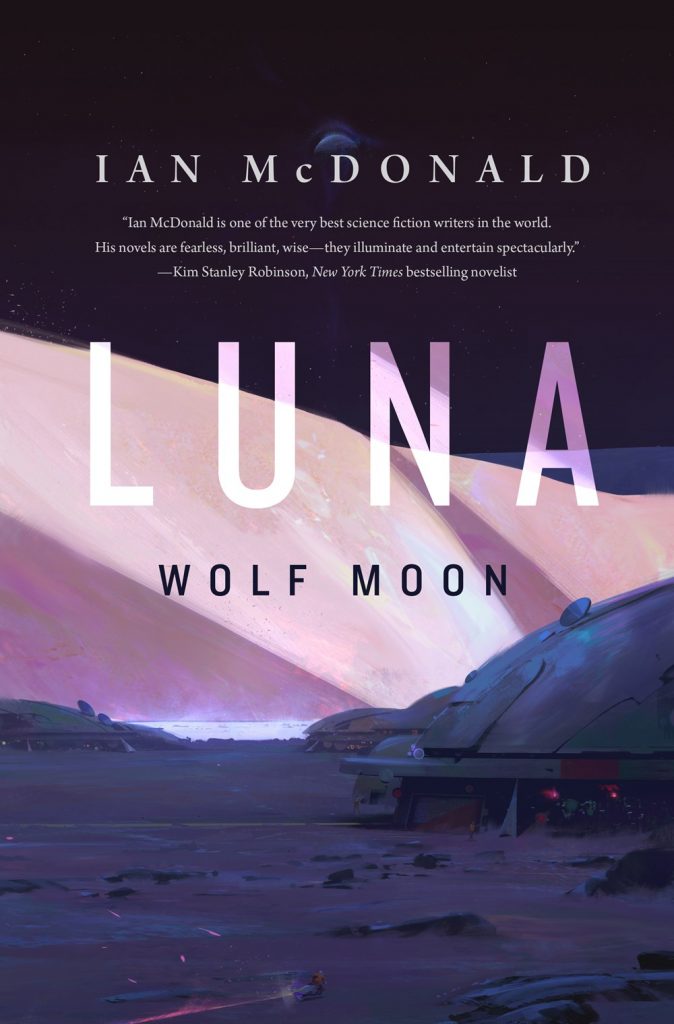 ‘Powerful sequel… compelling throughout. Each of McDonald’s viewpoint characters is made human in fascinating and occasionally disturbing detail, and the solar system of the 22nd century is wonderfully delineated. Fans of the first volume will love this one and eagerly look forward to the next.’ — Publishers Weekly on WOLF MOON

‘Mafia-style mining families clash in a compelling fantasy that offers up all the pleasures of a cut-throat soap opera in space…That McDonald is able to spin a compelling story from this unforgiving set-up is testament to his skill as a writer… One thing Luna does exceptionally well is to puncture Old Heinlein’s assumption that a frontier society based on the primacy of the family and a disregard of conventional laws would end up like idealised smalltown America. Luna argues that any realistic future colonisation of the moon will be much more The Sopranos than The Waltons. LUNA is as gripping as it is colourful, and as colourful as it is nasty.’ — Guardian

‘No one writes like Ian McDonald, and no one’s Moon is nearly so beautiful and terrible… Ian McDonald’s never written a bad novel, but this is a great Ian McDonald novel… The fashion sense of William Gibson, the design sense of Bruce Sterling, the eye for family drama of Connie Willis, the poesie of Bradbury, and the dirty sex of Kathe Koja and Samuel Delany… LUNA: NEW MOON is the first book of a two-book cycle. Now I’m all a-quiver for the next one.‘ — BoingBoing

‘Fans of cerebral, high-concept science fiction will love this exploration of society on the moon many decades after it has been colonized. The focus is more on concept and plot than on character, but the former are compelling enough to make this an addictive page-turner. Including the stories of many characters gives the reader important insights into different facets of society, and although the book starts at a slow pace, it accelerates into a mesmerizing political thriller.’ — RT Book Reviews on NEW MOON 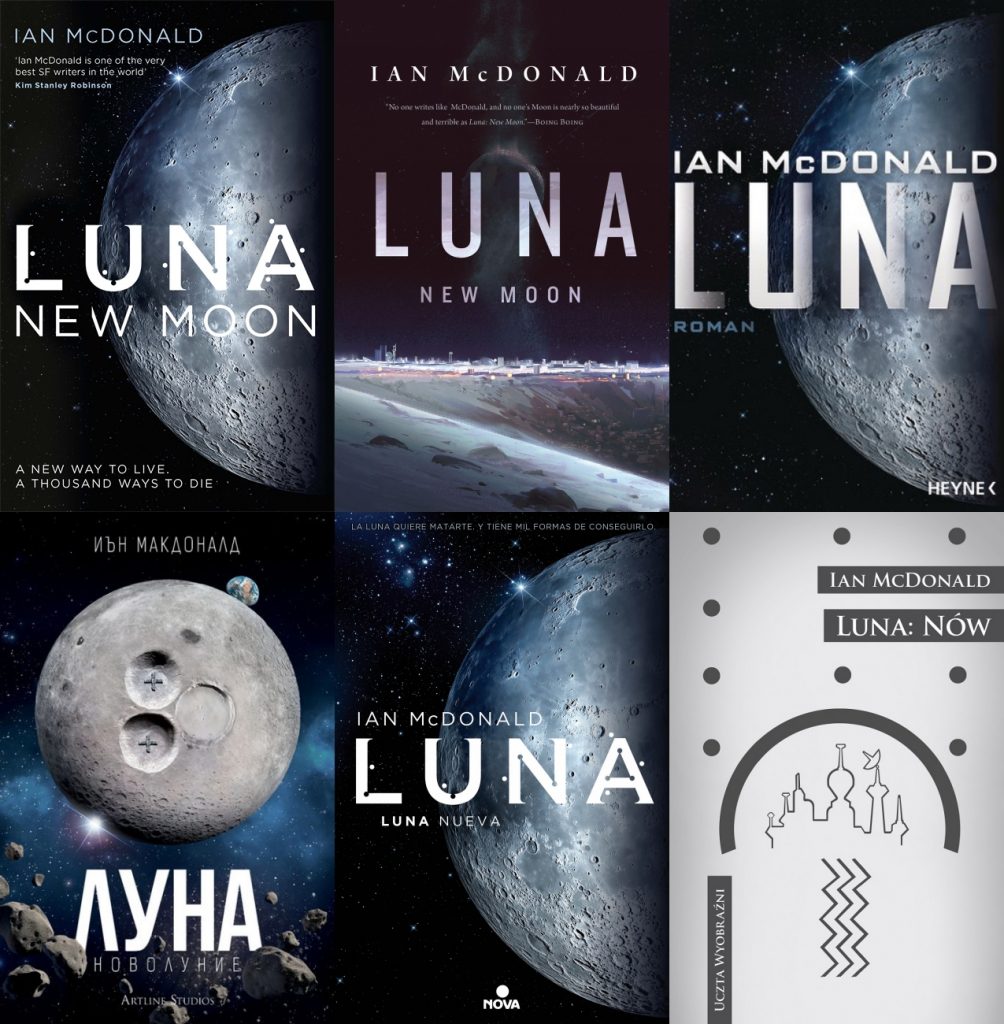