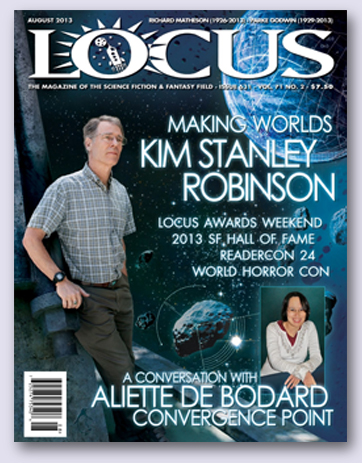 The new edition of LOCUS (*the* definitve journal of the science fiction community) was published yesterday and features a fantastic and insightful interview with our client Aliette De Bodard in which she discusses her work, her influences and the particular story of how she became a Zeno client!

‘I went to World Fantasy in 2008, and it was great – I met lots of people, I networked. One of the people I met at the bar was John Berlyne, who introduced himself to me and gave me his card. The next day I was flying from Calgary to London and then back to France, except the Calgary flight never took off. So I got stuck in this dingy little hotel in the outskirts of Calgary,and ended up chatting again with John, who was with this other chap I didn’t know, Marc Gascoigne. We talked a bit and John said he was starting his own agency, and so I asked Marc, ‘What is it that you do?’ and he said, ‘I’m an editor and I’m putting together my own imprint.’ That turned out to be Angry Robot. We chatted some more, and Marc said, ‘We’re bored. Why don’t you pitch your novel to us?’

‘‘I thought, ‘Okay, do not panic, do not panic!’ I managed to get through the pitch. Marc said, ‘That sounds good, send me the first few chapters,’ and John said, ‘I also want to see those chapters.’ I knew I needed to completely rewrite my first chapters, so I did that on the return trip. I almost missed my connecting flight to Paris because I was too busy rewriting! I sent the chapters off maybe two days after arriving back home.

‘‘About a month and a half later, after they had both asked for the full manuscript, I had a conversation with John and he said, ‘I might be interested in representing this.’ Two or three days later, while I was still mulling that over, it I got an e-mail from Marc saying, ‘We would like to make you an offer, do you have an agent?’ I thought, ‘No, but that can be arranged!’

A great argument for writers going to conventions! The full interview can be read in the new edition of LOCUS – click the link for details on how to get hold of a copy.