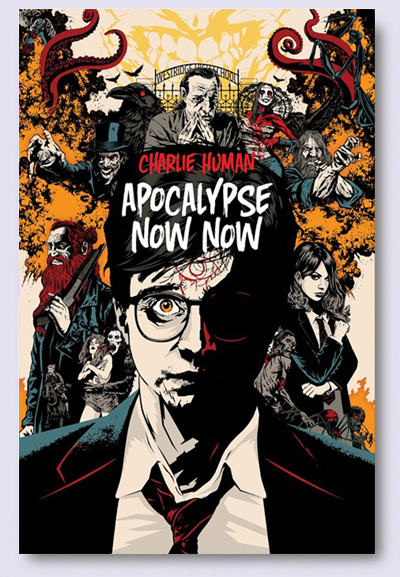 We are very pleased to share the news that Joey Hi-Fi‘s wonderful art that graces the cover of Charlie Human‘s APOCALYPSE NOW NOW has been chosen as a finalist in The Kitschies‘ Inky Tentacle (Cover Art) category! Selected from over 230 covers, it’s great to hear that Joey’s work has made the final short list!

As for Charlie’s novel, it continues to receive rave reviews from far and wide! As a result, anticipation for the sequel, KILL BAXTER, just keeps on growing. APOCALYPSE NOW NOW was published by Century in the UK, and Umuzi/Random Struik in South Africa. Here’s a reminder of the novel’s synopsis…

That is until his girlfriend, Esmé, is kidnapped and Baxter is forced to confront a disturbing fact about himself — that he has a heart, and the damn thing is forcing him to abandon high-school politics and set out on a quest to find her. The clues point to supernatural forces at work and Baxter is must admit that he can’t do it alone. Enter Jackie Ronin, supernatural bounty hunter, Border War veteran, and all-round lunatic, who takes him on a chaotic tour of Cape Town’s sweaty, occult underbelly.

What do glowing men, transsexual African valkyries, and zombie-creating arachnids have to do with Esmé’s disappearance? That’s what Baxter really, really needs to find out.

And some of the aforementioned critical praise…

‘Human effortlessly mixes Baxter’s psychiatrist’s comments on him with lurid scenes of Cape Town’s supernatural clubland. It’s quick, amusing and widely referenced, and the reader gets no help on which reality to take seriously.’  —  Mail & Guardian

‘… breakneck pace and mad imagination… APOCALYPSE NOW NOW [is] such an addictive experience. As one of an associate of Ronin’s remarks: “There’s no pause button, you understand? … Once it starts you have to see it through.” All too true!’  —  Tor.com