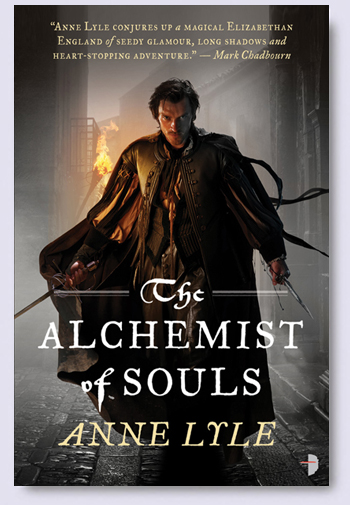 THE ALCHEMIST OF SOULS, Anne Lyle‘s debut novel, is on offer for the whole of May, in the US! The eBook is discounted to $4.99, from all major eBook retailers. The book is the first in the Night’s Masque fantasy trilogy, published by Angry Robot Books. Here’s the synopsis…

When Tudor explorers returned from the New World, they brought back a name out of half-forgotten Viking legend: skraylings. Red-sailed ships followed in the explorers’ wake, bringing Native American goods – and a skrayling ambassador – to London. But what do these seemingly magical beings really want in Elizabeth I’s capital?

Mal Catlyn, a down-at-heel swordsman, is seconded to the ambassador’s bodyguard, but assassination attempts are the least of his problems. What he learns about the skraylings and their unholy powers could cost England her new ally – and Mal Catlyn his soul.

Angry Robot Books also published the other two novels in the series: THE MERCHANT OF DREAMS and THE PRINCE OF LIES.

‘An outstanding debut and Lyle is certainly a name to watch for the future. I thoroughly enjoyed it.’ — British Fantasy Society on THE ALCHEMIST OF SOULS

‘It’s always a pleasure to encounter a debut fantasy novel that combines storytelling verve with inventive turns of phrase.’ — SFX Magazine on THE ALCHEMIST OF SOULS

‘Full of vitality and some spectacular sequences, THE MERCHANT OF DREAMS is simply fantastic… A more fully realised world, richer secondary characters, an excellent main cast, and a very moving and emotional story… certainly a stronger novel than its predecessor.’ — The Founding Fields

‘THE MERCHANT OF DREAMS is a fantastic sequel to THE ALCHEMIST OF SOULS… Lyle is a master of blending historical fact and fantastic fiction and she’s only gotten better with her second book.’ — A Fantastical Librarian

‘As exciting and action-packed as the previous two volumes, and it picks up all the loose threads that were left hanging at the end of THE MERCHANT OF DREAMS… I highly recommend this book, but don’t start here. Start with THE ALCHEMIST OF SOULS and read them in order or you’ll be floundering. For those that have followed the series so far, this is a tight conclusion…’  —  Fantasy Faction on THE PRINCE OF LIES 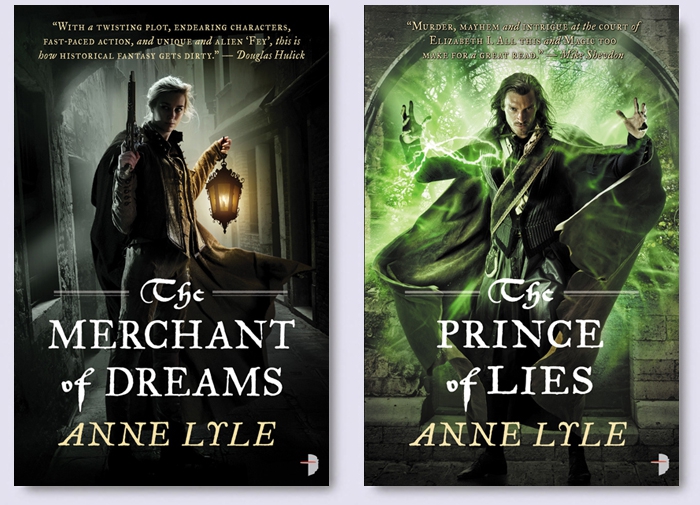