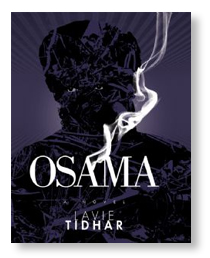 First up, a slew of titles by Lavie Tidhar – including his PS Publishing novel OSAMA, a work that has been on everyone’s lips of late, not least because it was name-checked in Christopher Priest’s now infamous ranty  blog post as one of the titles (along with WAKE UP AND DREAM by fellow Zeno client, Ian R. MacLeod) that should have made this year’s Arthur C. Clarke award shortlist. We, of course, couldn’t possibly comment on this matter… except to say how absolutely correct Mr Priest is!

Along with OSAMA, Audible will also be releasing Lavie’s entire BOOKMAN trilogy in audio – THE BOOKMAN, CAMERA OBSCURA and the recently published THE GREAT GAME, and the final title in this superb batch is Lavie’s collaboration with fellow Israeli author Nir Yaniv, THE TEL-AVIV DOSSIER, a scarcer Tidhar title, originally published by Chizine Publications in Canada.

And finally – very much in the sense of ‘at long last’ –  an author with too many award wins and nominations to list here, William Gibson. To accompany their release of Gibson’s new non-fiction collection DISTRUST THAT PARTICULAR FLAVOUR, Audible have acquired a number of backlist titles – namely NEUROMANCER, THE DIFFERENCE ENGINE, PATTERN RECOGNITION, SPOOK COUNTRY and ZERO HISTORY.