We have two very exciting bits of news relating to Tanya Huff, today. First up, Tanya’s latest novel, THE SILVERED, has won a 2013 Aurora Award for Best Novel! The novel was published in the US by DAW Books, and is due to be published in the UK by Titan Books, in November 2013.

Which brings us rather neatly to the second piece of news, and that is a double-cover reveal! Titan Books have unveiled the new UK covers for THE SILVERED and also the first book in Tanya’s Confederation science fiction series, VALOUR’S CHOICE. Here they are, followed by their respective synopses… 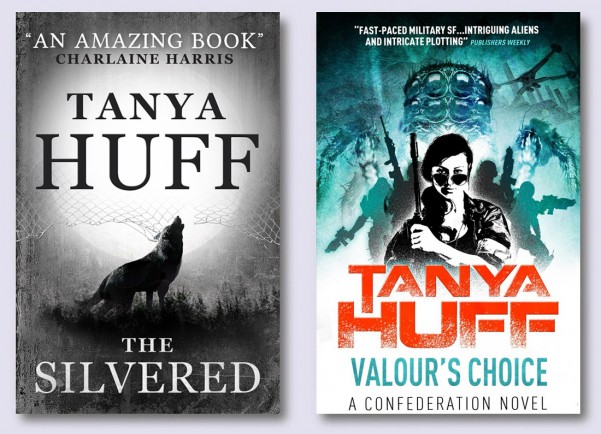 The Empire has declared war on the small, were-ruled kingdom of Aydori, capturing five women of the Mage-Pack, including the wife of the were Pack-leader. With the Pack off defending the border, it falls to Mirian Maylin and Tomas Hagen—she a low-level mage, he younger brother to the Pack-leader—to save them. Together the two set out on the kidnappers’ trail, racing into the heart of enemy territory. But with every step the odds against their survival, let alone their success, grow steeper…

In the distant future, humans and several alien races have been granted membership in the Confederation — at a price. They must serve and protect the far more civilized species who have long since turned away from war. When her transport ship is shot down, a routine diplomatic mission across the galaxy becomes anything but, and Staff Sergeant Torin Kerr must fight to keep her platoon alive.

These two books are published by Titan Books, as part of a 10-book deal, which covers five other books in the Confederation series and also three novels in the Enchantment Emporium series.

Zeno represents Tanya Huff in the UK and Commonwealth, on behalf of the JABberwocky Literary Agency in New York.