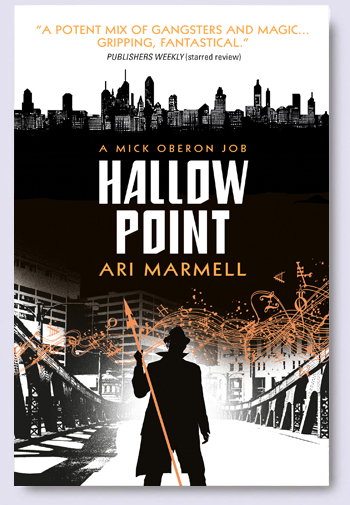 We’re very happy to share with you today the new cover for Ari Marmell‘s HALLOW POINT! The sequel to HOT LEAD, COLD IRON, the novel is due to be published in May 2015 by Titan Books. There’s no official synopsis, just yet, but we’ll be sure to share it as soon as we have it.

In the meantime, here are some reviews of the first Mick Oberon novel…

‘In this gripping fantastical investigation, Marmell (The Goblin Corps) creates an engaging world and an unlikely hero… The potent mix of gangsters, magic, Fae politics, and a strega on the warpath makes for a ride that never touches the brakes. Marmell expertly maximizes the thrills, leaving the reader with a lingering desire for a magic wand and a glass of warm milk.’ — Publishers Weekly (Starred Review)

‘HOT LEAD, COLD IRON is as hard boiled a detective drama as anything written by Dashiell Hammett, Raymond Chandler or Mickey Spillane, and Marmell captures the vernacular of the period wonderfully… if [the sequel] is as fun and entertaining as this one, then Ari Marmell will soon be crowned the foremost purveyor of Macabre Noir.’ — Starburst

‘There are enough subtle and surprising elements involved in the world to enchant readers, and Oberon is an absolutely delightful protagonist… He has an uncanny way of paring opposing elements – a strong, fast, bold…with stunningly subtle and incredibly well crafted world building elements… It’s a lot of fun, and Marmell is an author I really want to hit it big. He deserves it, and this book shows a lot of his strengths.’ — Bookworm Blues

Zeno represents Ari Marmell in the UK and Commonwealth, on behalf of the JABberwocky Literary Agency in New York.