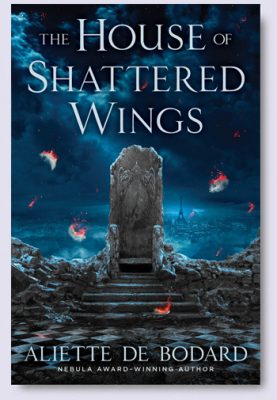 Above you can see the striking US cover for Aliette de Bodard‘s upcoming HOUSE OF SHATTERED WINGS. The first in a new, highly-anticipated duology, the novel is due to be published in the US by Roc Books on September 1st, 2015. Here’s the synopsis…

Multi-award winning author Aliette de Bodard, brings her story of the War in Heaven to Paris, igniting the City of Light in a fantasy of divine power and deep conspiracy…

In the late Twentieth Century, the streets of Paris are lined with haunted ruins. The Great Magicians’ War left a trail of devastation in its wake. The Grand Magasins have been reduced to piles of debris, Notre-Dame is a burnt-out shell, and the Seine has turned black with ashes and rubble and the remnants of the spells that tore the city apart. But those that survived still retain their irrepressible appetite for novelty and distraction, and The Great Houses still vie for dominion over France’s once grand capital.

Once the most powerful and formidable, House Silverspires now lies in disarray. Its magic is ailing; its founder, Morningstar, has been missing for decades; and now something from the shadows stalks its people inside their very own walls.

Within the House, three very different people must come together: a naive but powerful Fallen angel; an alchemist with a self-destructive addiction; and a resentful young man wielding spells of unknown origin. They may be Silverspires’ salvation—or the architects of its last, irreversible fall. And if Silverspires falls, so may the city itself.

HOUSE OF SHATTERED WINGS is due to be published in the UK by Gollancz on August 20th, 2015.

Aliette is also the author of the Obsidian & Blood trilogy, published by Angry Robot Books; as well as multiple award-winning and nominated short stories and novellas. She has won two Nebula Awards, a British SF Association Award, and a Locus Award.