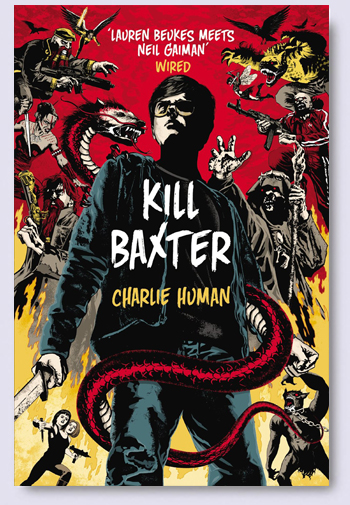 We are very happy indeed to be able to share with you the superb cover for Charlie Human‘s second novel, KILL BAXTER. We think you can agree, Joey Hi-Fi has once again knocked it right out of the park! KILL BAXTER is the sequel to APOCALYPSE NOW NOW, Charlie’s critically-acclaimed debut. Here’s the synopsis for the new novel…

And he thought the hard part was over…

The world been massively unappreciative of sixteen-year-old Baxter Zevcenko. His bloodline may be a combination of ancient Boer mystic and giant shape-shifting crow, and he may have won an inter-dimensional battle and saved the world, but does anyone care? No.

Instead he’s packed off to Hexpoort, a magical training school that’s part reformatory, part military school, and just like Hogwarts (except with sex, drugs, and better internet access). Th problem is that Baxter sucks at magic. He’s also desperately attempting to control his new ability to dreamwalk, all the while being singled out by the school’s resident bully, who just so happens to be the Chosen One.

‘… a bowl of fireworks… It has porn-peddling adolescents, ginger bearded monk ninjas, killer crows and zombie-filled sex dungeons ruled over by parasitic mega-spiders. What’s not to love!?!’ — J For Jetpack

KILL BAXTER is due to be published by Century in the UK in July 2014. As for APOCALYPSE NOW NOW, Joey Hi-Fi is working on a separate cover for Charlie’s home South African edition, and we’ll be sure to share that will you as soon as we can.