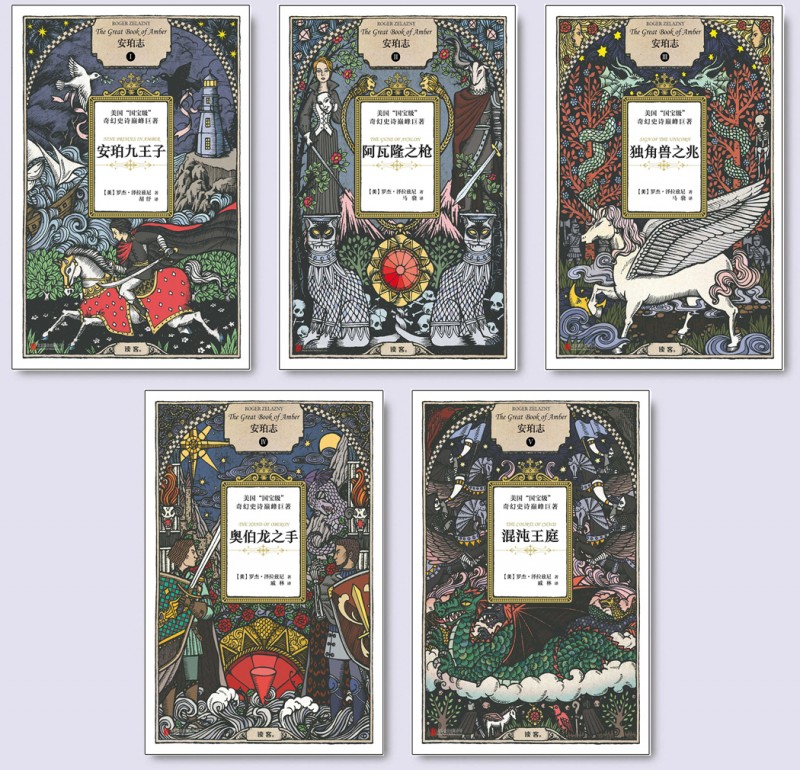 Above you can see the gorgeous covers for the Chinese editions for the first five books in Roger Zelazny‘s classic fantasy series, The Chronicles of Amber. To be published by Dook in China, we think you’ll agree they’re quite striking.

The first five books in the series are NINE PRINCES IN AMBER (安珀九王子), THE GUNS OF AVALON (阿瓦隆之枪), SIGN OF THE UNICORN (独角兽之兆), THE HAND OF OBERON (奥伯龙之手), and THE COURTS OF CHAOS (混沌王庭).

Here is the English-language synopsis for the first book…

Amber, the one real world, wherein all others, including our own Earth, are but Shadows. Awakening in an Earth hospital unable to remember who he is or where he came from, Corwin is amazed to learn that he is one of the sons of Oberon, King of Amber, and is the rightful successor to the crown in a parallel world.

Amber burns in Corwin’s blood. Exiled on Shadow Earth for centuries, the prince is about to return to Amber to make a mad and desperate rush upon the throne. From Arden to the blood-slippery Stairway into the Sea, the air is electrified with the powers of Eric, Random, Bleys, Caine, and all the princes of Amber whom Corwin must overcome.

Yet, his savage path is blocked and guarded by eerie structures beyond imagining; impossible realities forged by demonic assassins and staggering horrors to challenge the might of Corwin’s superhuman fury.

Zeno represents Roger Zelazny in translation, on behalf of the Zelazny Estate.