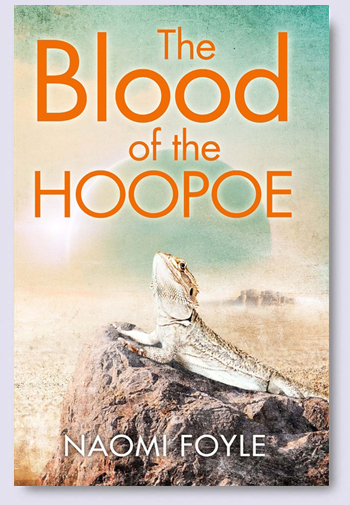 THE BLOOD OF THE HOOPOE is the third novel in Naomi Foyle‘s Gaia Chronicles sci-fi series. Published by Jo Fletcher Books in the UK, here’s the synopsis…

Astra is the long prophesied icon of unification for the peoples of Non-Land, but is she ready to accept her destiny?

War is breaking out in Kadingir. Still struggling to accept her role as a long prophesied icon of unification between Is-Land and Non-Land, Astra Ordott is on a journey across the wind sands to join her father and his people – the mystics of Shiimti, who claim to hold the secret of truly healing the damaged relationship between human beings and the Earth. Astra’s desperate to get there quickly, but when her guide and companion, the shepherd Muzi, leads her off course into the path of a vicious sandstorm, she is forced to confront what the gods of their devastated world might be telling her: that there will be no refuge from her destiny.

The novel is due to be published in March 2016. Jo Fletcher Books also publish the first two novels in the series — ASTRA and ROOK SONG, and also Foyle’s stand-alone novel SEOUL SURVIVORS.

‘Readable and entertaining.’ — Interzone on ASTRA

‘Shocking though it might be in some respects, ASTRA certainly provides food for thought… the story quickly becomes engrossing. The ending is abrupt, but it makes you crave the second instalment of the Gaia Chronicles. ASTRA will certainly not be everyone’s cup of tea, but personally I am looking forwards to the next book with curiosity and excitement.’ — Starburst Magazine

‘The highly politicised narrative is an enthralling and absorbing read… Where the first book offered a shocking, but somewhat aspirational alternative way of living, ROOK SONG delves further into the political influence that enables the way of life the Gaian’s are privileged to inhabit… Offering plenty of twists and surprises, ROOK SONG outdoes its predecessor with a more developed story and plenty of conspiracies that pull the reader in. Book one was a comment on how society should live to protect the planet, book two is a comment on how people should prevent international conflict and wars.’ — Starburst