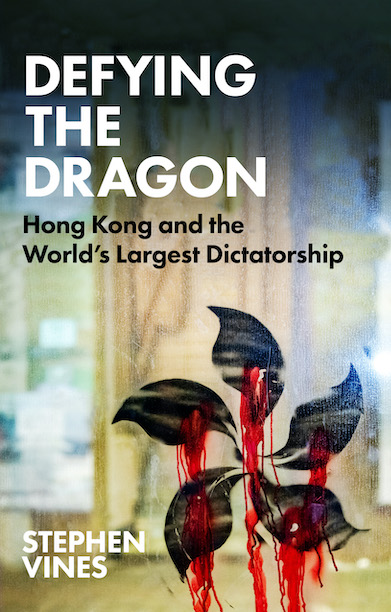 We’re happy to report that Stephen Vines‘s DEFYING THE DRAGON has been acquired by Rive Gauche, to be published in Taiwan! The rights were sold by Jennifer Lee at the Grayhawk Agency, on behalf of Kristina Pérez of Zeno.

DEFYING THE DRAGON is already available in the UK and North America; published by Hurst Publishers and Oxford University Press, respectively. Here’s the synopsis…

Defying the Dragon tells a remarkable story of audacity: of how the people of Hong Kong challenged the PRC’s authority, just as its president reached the height of his powers. Is Xi’s China as unshakeable as it seems? What are its real interests in Hong Kong? Why are Beijing’s time-honoured means of control no longer working there? And where does this leave Hongkongers themselves?

Stephen Vines has lived in Hong Kong for over three decades. His book shrewdly unpacks the Hong Kong–China relationship and its wider significance — right up to the astonishing convergence of political turmoil and international crisis with Covid-19 and the 2020–21 crackdown.

Vividly describing the uprising from street level, Vines explains how and why it unfolded, and its global repercussions. Now, the international community is reassessing relations with Beijing, just as Hong Kong’s rebellion and China’s handling of the pandemic have exposed the regime’s weakness. In a crisis that has become existential all round, what lies ahead for Hong Kong, China and the world?

‘A detailed chronicle of Hong Kong’s fight in the face of repression. Anyone who cares about Hong Kong and China will definitely want to read this book.’ — Joshua Wong, Hong Kong’s most famous democracy advocate

‘Written with honesty and integrity, [DEFYING THE DRAGON] chronicles a critical moment in Hong Kong’s history as the city prepares for an unclear future.’ — Post Magazine

‘A definitive, compelling account of a drama that has gripped the world. Vines interweaves frontline reporting, insights from key players and a local’s knowledge to chronicle Hong Kong’s defiant challenge to the might of Xi Jinping’s China.’ — Philip Sherwell, Asia correspondent, The Sunday Times

‘A superb book about Beijing’s ruthless and depressing efforts to stamp out Hong Kong’s freedoms, erode its rule of law and attack its identity as an open society. Vines, a brave and distinguished journalist, sets this sad story of a great international city within the brutal politics of the Chinese regime.’ — Lord Chris Patten, last British governor of Hong Kong

‘One of the most important stories of our times of the fight against authoritarian regimes. The best way to understand China is through the lens of Hong Kong’s struggles.’ — Nathan Law, leading democracy activist