Next Tuesday (January 19th), Edward Cox will be taking part in a Q&A event at Blackwell’s in Holborn, London, at 6:30. The event will also include fellow fantasy authors Den Patrick and Jen Williams.

Cox’s Relic Guild series is published in the UK by Gollancz: THE RELIC GUILD, THE CATHEDRAL OF KNOWN THINGS and the forthcoming THE WATCHER OF DEAD TIME. Here’s the synopsis for THE RELIC GUILD, in case you haven’t had the chance to check it out, yet…

In the sealed Labyrinth, a young woman must find a way to control her magic and escape her prison in this remarkable debut fantasy.

The series has received some great reviews, so far…

‘A terrific debut novel, with plenty of scope for expansion and some really good world-building. Most importantly, lots of fun. Looking forward to the next one.’ — Joanne Harris on THE RELIC GUILD

‘An exciting blend of steampunk, fantasy, horror, and pulp adventure… incredibly detailed, but it never threatens to take over the narrative… Cox avoids the fantasy cliché of characters being little more than their occupations or particular field of expertise, and the format of past and present allows the reader to see how much some of them have changed and developed, and why… THE RELIC GUILD is an intriguing, original and enjoyable book, a daring mix of genres that initially feels like it shouldn’t work, but is ultimately greater than the sum of its parts.’ — Starburst

‘Tightly woven together and all storylines move forward with clarity and purpose: no character is a spare part; no passages tread water. The book accelerates to its conclusion with juicy revelations but a shock held back for the final pages… everything a reader would want to compel them onto the final book of the trilogy… touches of fantasy, horror and the weird but eschewing many of the regular tropes of the genre: it is quite an achievement to create something so different and so fresh… Every page bursts with magic… fervid and sensual writing… an impressive sequel, building on its predecessor in its sheer inventiveness, scope and story development. It is hard to call anything ‘unique’, but perhaps this is as close as fantasy gets.‘ — British Fantasy Society on THE CATHEDRAL OF KNOWN THINGS

‘THE CATHEDRAL OF KNOWN THINGS is… both more of the same whilst being filled with fresh ideas at the same time… a blend of horror, fantasy and civilised steampunk adventure. It’s also quite a bit more cinematic than the first book… Cox has taken the time to explore both the world and his characters with this sequel. The Guild is part typical fantasy adventuring party and partially a superhero team, and this time round we get to learn more about what makes them tick. Not only do we discover more about the heroes, but the scenery-chewing bad guys also get to have their own backstory as well. Add on top the gentle bringing together of existing storylines and some rather entertaining self-discoveries by the main characters, and what we have here is an excellent middle book… leaves us wanting more…’ — Starburst 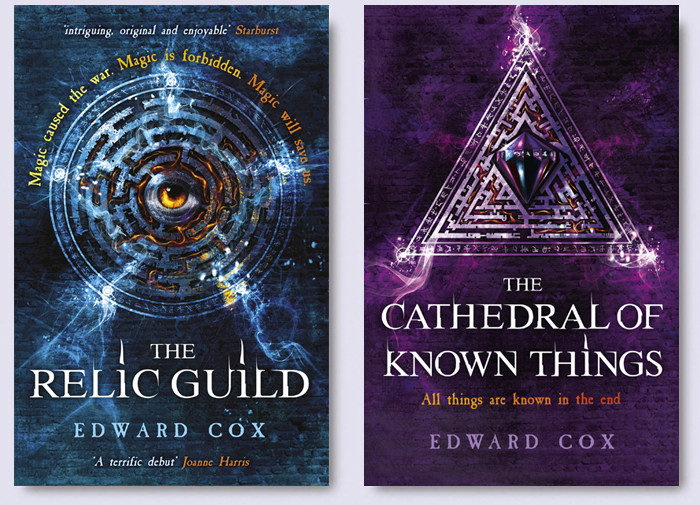