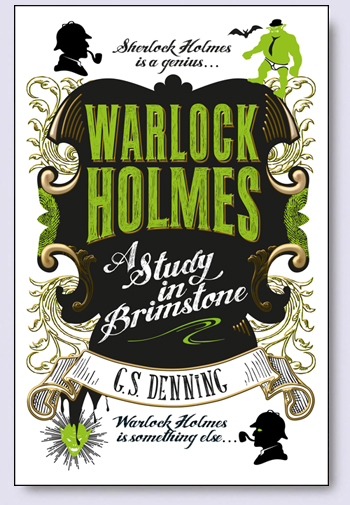 G.S. Denning‘s debut novel, WARLOCK HOLMES: A STUDY IN BRIMSTONE, is out tomorrow in the UK! Published by Titan Books, here’s the synopsis…

Sherlock Holmes is an unparalleled genius who uses the gift of deduction and reason to solve the most vexing of crimes.

Warlock Holmes, however, is an idiot. A good man, perhaps; a font of arcane power, certainly. But he’s brilliantly dim. Frankly, he couldn’t deduce his way out of a paper bag. The only thing he has really got going for him are the might of a thousand demons and his stalwart flatmate. Thankfully, Dr. Watson is always there to aid him through the treacherous shoals of Victorian propriety… and save him from a gruesome death every now and again.

An imaginative, irreverent and addictive reimagining of the world’s favourite detective, Warlock Holmes retains the charm, tone and feel of the original stories by Sir Arthur Conan Doyle while finally giving the flat at 221b Baker Street what it’s been missing for all these years: an alchemy table.

Reimagining six stories, this riotous mash-up is a glorious new take on the ever-popular Sherlock Holmes myth, featuring the vampire Inspector Vladislav Lestrade, the ogre Inspector Torg Grogsson, and Dr. Watson, the true detective at 221b. And Sherlock. A warlock.

The first in a proposed trilogy, the sequels are tentatively called THE BATTLE OF BASKERVILLE HALL and PRINCE OF TATTERS, PRINCE OF ASH. The novel has already received some good reviews, including…

‘Debuting author Denning’s ambitious mashup on Sherlock Holmes begins as a supernatural spoof of Doyle’s A Study in Scarlet (1888), with the initial meeting of Holmes and Dr. John Watson. It doesn’t take long for Watson to notice strange goings-on with the idiosyncratic Warlock Holmes. He soon learns that Holmes can channel mystical powers and control other-dimensional demons. Warlock’s gleeful enthusiasm for the supernatural is often off-putting to those around him, so Watson begins coaching him in the art of deduction so that he may better guard his secrets… While cast and settings are faithful to the original stories, Denning upends the narrative with a host of paranormal turns that range from the irreverent to the gruesome. Mashup fans will be eagerly awaiting more of this obvious match for fans of Seth Grahame-Smith.’ — Booklist

‘Cheerfully pokes fun at the Holmes-ian canon… A reimagining of Sherlock Holmes that is often very silly but consistently funny, clever, and entertaining.’ — Kirkus

‘Taking a true classic and twisting it into fantasy does not always work; either too much respect is given to the original, or too little. Denning has managed a brilliant balance and has rewritten the stories in a way that is true to the original, but also has a strangely believable fantasy element. When you really think about it; Sherlock could actually have been a Warlock and Denning makes you believe.’ — Bookbag

‘As a diehard Sherlock fan, I have high standards for anyone attempting to take on this genre. I was hesitant when reading the plot description but Denning did a great job of taking on this larger than life character and tweaking it into a completely new take, while retaining the charm of the original. I enjoyed how the author took original stories and reworked them into new supernatural laden delights. I’m eagerly awaiting the next book to see how the character development continues.’ — Night Owl Suspense

‘A funny and lighthearted retelling of Conan Doyle’s stories, and a must-read for fans.’ — Alice & Her Looking Glass

Zeno represents G.S. Denning in the UK and Commonwealth, on behalf of the JABberwocky Literary Agency in New York.