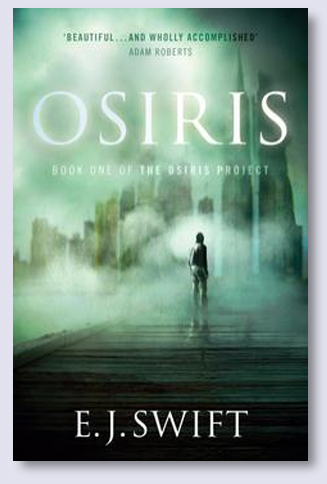 The first title in a trilogy, OSIRIS tells the story Adelaide, the black sheep of a powerful and rich ruling family in the great ocean city of Osiris. Not too long ago, her twin brother went missing, and she is determined to find him. To that end, while her family just accepts his disappearance (with some relief, in certain instances), Adelaide forms an alliance with Vikram, a third-generation storm refugee who hopes she can in return save his people from certain death by cold and starvation.

OSIRIS was first published last year in the United States by Night Shade Books, and received a whole raft of greatreviews. John DeNardo of SF Signal described the novel as ‘A fantastic blend of worldbuilding, excellent storytelling and complex characters‘. The Cleveland Plain Dealer felt it was ‘a terrific debut‘ and the LA Review of Books called the book ‘nuanced, intriguing… [with a] sophisticated control of pace and tone, an ability to rapidly shift gears within scenes, and a willingness to undercut one scene with another‘.

Library Journal picked OSIRIS as their SFF Debut of the Month for July 2012, describing the novel as a ‘brilliant near-future vision of an ecologically and socially devastated world and characters who resonate with life and passion, [and] marks her as an author to watch.’

The novel is one of politics, social inequality, and what people are willing to do to either protect the status quo or break it down. Here is the official blurb…

Adelaide Rechnov – Wealthy socialite and granddaughter of the Architect, she spends her time in pointless luxury, rebelling against her family in a series of jaded social extravagances and scandals until her twin brother disappears in mysterious circumstances.

Vikram Bai – He lives in the Western Quarter, home to the poor descendants of storm refugees and effectively quarantined from the wealthy elite. His people live with cold and starvation, but the coming brutal winter promises civil unrest, and a return to the riots of previous years.

As tensions rise in the city, can Adelaide and Vikram bridge the divide at the heart of Osiris before conspiracies bring them to the edge of disaster?

E.J. Swift will be signing copies of Osiris in London’s Forbidden Planet tomorrow, Friday 8th Feb, from 6pm-7pm. It is a joint signing with Liesel Schwartz.