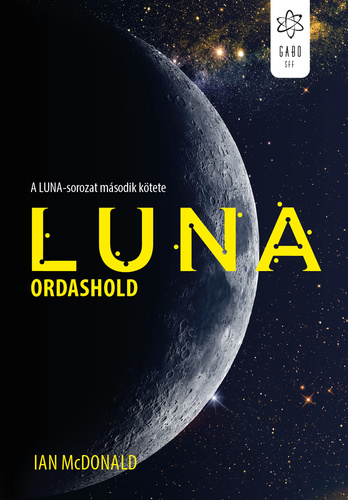 Ian McDonald‘s second Luna novel, WOLF MOON, is out now in Hungary! Published by Gabo as ORDASHOLD, here’s the synopsis…

Gabo has also published the first novel in the series, NEW MOON, as ÚJHOLD. 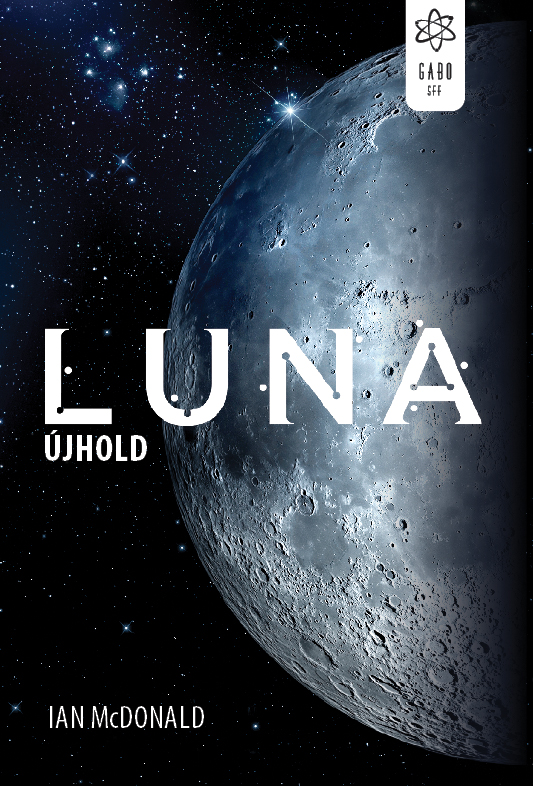 The Luna series is published in the UK by Gollancz, in North America by Tor Books, and widely in translation. Here’s the English-language synopsis…

Corta Helio, one of the five family corporations that rule the Moon, has fallen. Its riches are divided up among its many enemies, its survivors scattered. Eighteen months have passed.

The remaining Helio children, Lucasinho and Luna, are under the protection of the powerful Asamoahs, while Robson, still reeling from witnessing his parent’s violent deaths, is now a ward – virtually a hostage – of Mackenzie Metals. And the last appointed heir, Lucas, has vanished from the surface of the moon.

Only Lady Sun, dowager of Taiyang, suspects that Lucas Corta is not dead, and – more to the point – that he is still a major player in the game. After all, Lucas always was a schemer, and even in death, he would go to any lengths to take back everything and build a new Corta Helio, more powerful than before. But Corta Helio needs allies, and to find them, the fleeing son undertakes an audacious, impossible journey – to Earth.

In an unstable lunar environment, the shifting loyalties and political machinations of each family reach the zenith of their most fertile plots as outright war between the families erupts.

‘… powerful sequel… compelling throughout. Each of McDonald’s viewpoint characters is made human in fascinating and occasionally disturbing detail, and the solar system of the 22nd century is wonderfully delineated. Fans of the first volume will love this one and eagerly look forward to the next.’ — Publishers Weekly

‘The fights and vengeance that follow are more vicious and intricate than anything in Game of Thrones, full of great acts of self-sacrifice and viciousness alike, brave cavalry charges and last stands, cowardice and avarice. McDonald’s great gift is to hold the micro- and macro-scale in his hand at once. Starting with his debut novel, 1988’s Desolation Road, McDonald has used his intense, finely crafted and small personal stories of his vast casts of characters as the pixels in an unimaginably vast display on which he projects some of the field’s most audacious worldbuilding — never worldbuilding for its own sake, either, but always in the service of slyly parodying, critiquing or lionizing elements of our present-day world.’ — Boing Boing

‘No one builds a world like Ian McDonald does. Piece by piece and brick by brick. Spare, simple, elegant when he needs to be…, deep and meaty when he wants to be…, he does his work like an artisan pulling a sculpture from stone. There are no wasted moves, nothing that isn’t vital because, in the end, everything is vital. Everything matters… it is fascinating, all of it. Because McDonald has made a world that is ruthless in its consistency and living, breathing reality, and then made characters who are not just living in it, but wholly and fully of it… Every moment with his characters makes them precious, real and alive.’ — NPR

‘Luna: New Moon was a “magnificent bastard of a book,” as I put it in my review. Part two, it’s my pleasure to tell you, is just as awesome, and just as masterfully nasty.’ — Tor.com