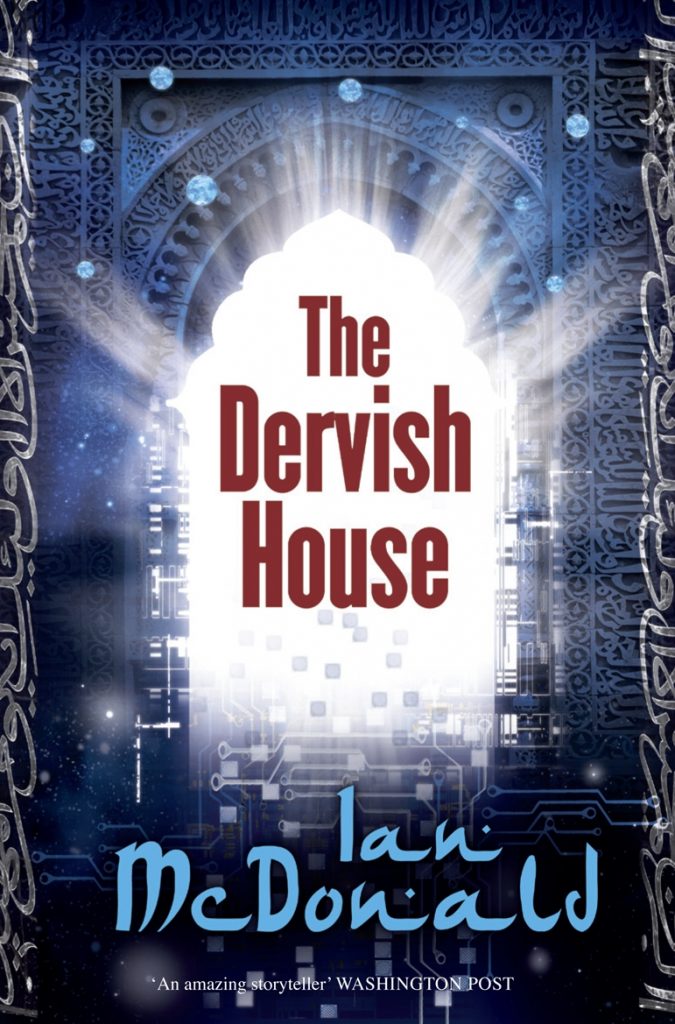 Ten years ago today, Ian McDonald‘s highly-acclaimed, award-winning THE DERVISH HOUSE was first published in the UK! Published by Gollancz, here’s the synopsis…

In the CHAGA novels Ian McDonald brought an Africa in the grip of a bizarre alien invasion to life, in RIVER OF GODS he painted a rich portrait of India in 2047, in BRASYL he looked at different Brazils, past present and future. Ian McDonald has found renown at the cutting edge of a movement to take SF away from its British and American white roots and out into the rich cultures of the world.

THE DERVISH HOUSE continues that journey and centres on Istanbul in 2025. Turkey is part of Europe but sited on the edge, it is an Islamic country that looks to the West. THE DERVISH HOUSE is the story of the families that live in and around its titular house, it is at once a rich mosaic of Islamic life in the new century and a telling novel of future possibilities.

The novel has racked up a number of great awards and commendations since its release. For example…

In addition to UK and North American editions (Pyr Books originally, now available via JABberwocky), the novel has been published quite widely in translation, with editions appearing in Turkey (Pegasus), Poland (MAG), France (Denoël/Gallimard), Hungary (Ad Astra), Bosnia (Paladin), Russia (ACT), Japan (東京創元社), and Bulgaria (Altera)! It is also available as an audiobook. Here are the covers… 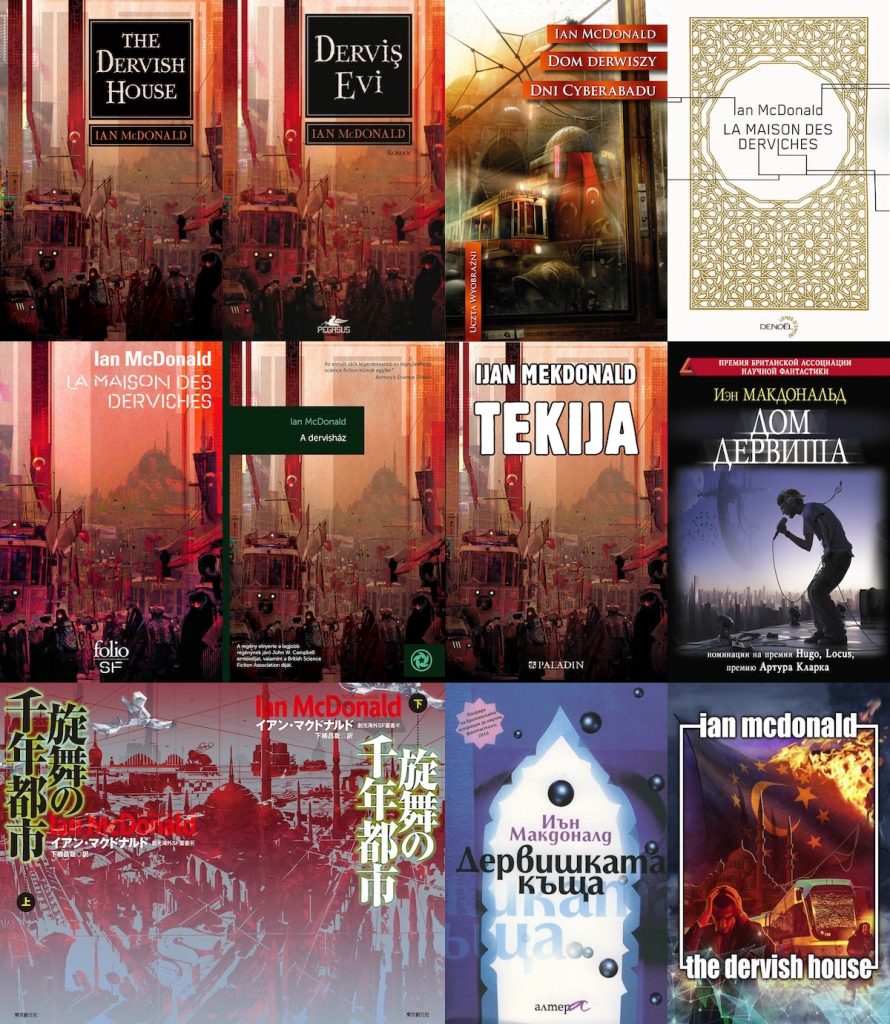 And, finally, here are just a few of the great reviews the novel has received since it was first published…

‘… a writer with an unerring instinct for finding resonance between theme and location… a rich and assured novel that, like much of Ken MacLeod’s recent work, revels in the shiny precision of the airport tech-thriller, yet insists on putting forward disquieting ideas rather than offering all-too-neat reassurances that you can somehow put escaped djinns back in bottles. This is as good as contemporary literary SF gets.’ — SFX (5* Review)

‘I know what to expect from Ian McDonald: broad vistas, intricately imagined futures, poetic language that transports and delights, a blend of mysticism and science that thrills and moves. But no matter how much foreknowledge I bring to a new Ian McDonald, I am always, always startled and thrilled by the exciting, moving epic story I find inside… To read McDonald is to fall in love with a place and to become drunk with it (see this free sample from Dervish House for a taste). I you’ve never read him, you’re in for a treat. If you’re a fan like me, you’ll be delighted anew. What a wonderful, wonderful book.’ — BoingBoing

‘[T]hrilling… A master in his own right, McDonald has written some of the best SF of the last fifteen years… a mosaic of a story that can be admired for its finely-wrought pieces but not fully appreciated until the book is finished and looked at again from some distance. The biggest part of the thrill is wondering how the characters will inevitably intersect… As much as THE DERVISH HOUSE is about biogenetics and history, McDonald couches some of his lushest prose in explorations of mysticism… McDonald, who is a native of Scotland, has an uncanny ability to write about other cultures authentically. He is a painstaking researcher and while he cannot always write with absolute authority, his dedication to making settings and characters feel alive is incredibly impressive… Ian McDonald has crafted a gorgeously lush novel, oozing with exciting, relevant ideas, a love letter to the Queen of Cities, to all cities, really.’ — Tor.com

‘… Istanbul, the Queen of Cities, and the setting for Ian McDonald’s near-future story of terrorism, nanotechnology and change rushing over us like a tidal wave of strangeness. Like his novels about the future of Indian, African and Brazilian society, McDonald’s new book is a conscientious attempt to write the Other from the inside and accept the possibility that the Anglo world may be a sideline… a brilliant, jewelled machine of a novel in which lives trigger events in other lives, in a sequence that skirts chaos and disaster, but ends with gorgeous order.’ — Independent

‘Those who have previously enjoyed McDonald’s narrative style will find a great deal to like in THE DERVISH HOUSE… McDonald’s writing has been steadily improving in terms of its lyrical and descriptive quality over the years, and it seems his recent foray into short stories with CYBERABAD DAYS has helped his focus and tightness. Several passages shine with literary flow and power… McDonald keeps his story fresh with every chapter and its flickering viewpoints, giving a series of snapshots that come together to form a panorama of his world. THE DERVISH HOUSE is an excellent sci-fi tale from a phenomenal writer, one who deserves every plaudit that can be heaped upon him. Those who appreciate slow-burning, dense and creative genre work should get this book now.’  —  SciFiNow

‘If you only read one SF book this year… make sure it’s Ian McDonald’s THE DERVISH HOUSE… I wish I’d written this!!! … It’s too bloody good for comfort… THE DERVISH HOUSE takes the expansive cultural mosaic of  RIVER OF GODS, multiplies it by the driving Latin beat and teetering sense of jeopardy in BRASYL, and gives you a novel that is his best yet by a whole new order of imaginative and sensuous magnitude… I cannot recommend it highly enough.’ — Richard K. Morgan (author of Altered Carbon and The Steel Remains)

‘[I]n THE DERVISH HOUSE, aspects of the geography, socioeconomic, religious and political groups do come alive – perhaps not as full characters, but as not-quite separate personalities within Istanbul – a city suffering and celebrating its multiple personalities… McDonald’s tried and true strategy of exploring the people of emerging economies in combination with the implications of technology on society in a near-future setting succeeds once again… It’s at times powerful, informative, and fun and another example of science fiction alive in our world.’ — NethSpace

‘[B]uilds on the complex, multi-layered narratives that McDonald has already produced in RIVER OF GODS and BRASYL. Like them, the very richness of the bustling world, the differing ways in which a range of characters intersect with the world, makes for a convincing portrait of the near future. In both those earlier novels, the past is the foundation upon which the future has been built, but the new novel goes further, because here the past is inescapable and the future perhaps unreachable. You feel that ten or so years from now, Istanbul could be just the way it is described here. The most important thing, though, is that as a kaleidoscopic portrait of that place at that time, THE DERVISH HOUSE is a very fine, very powerful novel indeed.’ — SF Site

‘[A] beautiful homage to one of most unique cities on earth… Nominated for the Hugo Award last week, THE DERVISH HOUSE is a worthy addition to that tradition. It is certainly one of the best novels I read in 2010. McDonald asks a lot his readers, but he rewards them with a beautiful novel that I believe will appeal to traditional readers in some ways more than lovers of genre fiction.’ — Staffer’s Book Review

‘[A]n audacious look at the shift in the power centers of the world and an intense vision of one possible future.’ — New York Times