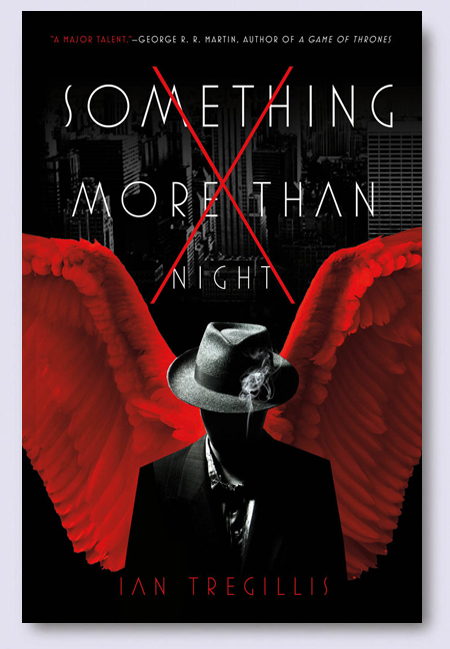 Reviews have started to pour in for Ian Tregillis‘s latest novel, the noir, supernatural mystery SOMETHING MORE THAN NIGHT, and they have continued the precedent set by his critically-acclaimed Milkweed trilogy – that is, they are glowing. The novel has been published by Tor Books in the United States. Additionally, it has been selected by Kirkus as a Best Book of 2013 in the SFF category and a not-to-be-missed December release by io9.

Amy Goldschlager, in her Best Book of 2013 post about SOMETHING MORE THAN NIGHT, talked with Ian a bit about the book, and described it as ‘… a brain-bending combo of angelic cosmogony, high-level physics and meta-noir… dazzling and dark, and more than a little quirky.’

From the io9 post, Charlie Jane Anders had the following to say: ‘Tregillis wowed people with his Milkweed Triptych, beginning with BITTER SEEDS. Now he’s back with a Dashiell Hammett-style murder mystery set in Thomas Aquinas’ version of Heaven. Just re-read that last sentence a couple times. And now that we’re all savagely jealous that Tregillis beat us to this amazing concept.’

‘Tregillis’ amazing new fantasy thriller is a tour de force: a real nail-biting page-turner. Set in a post- apocalyptic future, his cerebral, inventive narrative is a mix of classic gumshoe and quantum physics/theology. With an “OMG!” ending and characters who are anything but cookie-cutter, Tregillis solidifies his place as a brilliant voice in the genre.’  —  RT Book Reviews

‘… this book is something completely and absolutely different… One thing all of Tregillis’ books have in common is the stunning prose that flood his books with atmosphere and bring the scene and situation to glorious life… Tregillis combines his incredible prose, and stunningly complex world filled with unforgettable characters to create something new, nuanced, and different. This book is impossible to put down, and is an incredibly fast mover… SOMETHING MORE THAN NIGHT shows Tregillis at his finest…’ (5/5)  —  Bookworm Blues

‘When it comes to the world he has created in this book, I can only boggle in amazement… Tregillis has managed to completely floor me… I also adore Ian Tregillis’ writing style, which I’ve always figured was well suited for darker, more evocative stories, and as such I thought it was perfect for a book like this. Plus, I was just wowed by Bayliss’ voice and mannerisms, which are straight out of a crime noir novel of the 30s or 40s. I think that was the most impressive of all, and it’s obvious that great lengths were taken to make his character sound true to that particular era and genre.’  —  Bibliosanctum

Ian’s Milkweed trilogy – BITTER SEEDS, THE COLDEST WAR, and NECESSARY EVIL – has been published by Orbit Books in the UK. Orbit are also due to publish the author’s next series, Clakkers, in 2014.

Speaking of NECESSARY EVIL, and in yet more great news for Ian’s fiction: the final installment of the Milkweed trilogy has been selected by BuzzFeed as one of their 14 Greatest Science Fiction Novels of the Year! This is a well-deserved accolade! The novel was also one of Pat’s Fantasy Hotlist’s top Top 10 of 2013.

Zeno represents Ian Tregillis in translation and the UK/Commonwealth on behalf of Kay McCauley.