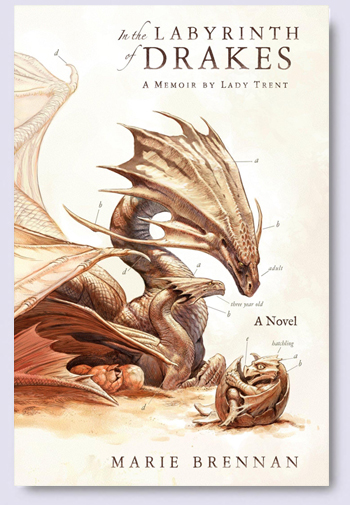 IN THE LABYRINTH OF DRAKES, the fourth novel in Marie Brennan‘s Memoirs of Lady Trent series, is out tomorrow in the UK! Published by Titan Books, here’s the synopsis…

The thrilling new book in the acclaimed fantasy series from Marie Brennan, as the glamorous Lady Trent takes her adventurous explorations to the deserts of Akhia.

Even those who take no interest in the field of dragon naturalism have heard of Lady Trent’s expedition to the inhospitable deserts of Akhia. Her discoveries there are the stuff of romantic legend, catapulting her from scholarly obscurity to worldwide fame. The details of her personal life during that time are hardly less private, having provided fodder for gossips in several countries.

As is so often the case in the career of this illustrious woman, the public story is far from complete. In this, the fourth volume of her memoirs, Lady Trent relates how she acquired her position with the Royal Scirling Army; how foreign saboteurs imperiled both her work and her well-being; and how her determined pursuit of knowledge took her into the deepest reaches of the Labyrinth of Drakes, where the chance action of a dragon set the stage for her greatest achievement yet.

Titan Books also publishes the first three novels in series: A NATURAL HISTORY OF DRAGONS, THE TOPIC OF SERPENTS, and VOYAGE OF THE BASILISK.

‘Lady Isabella Trent is a wonderfully charming female-lead who is willing to break from the gender roles of the era and do as her heart desires, study dragons… Marie Brennan does an incredible job of writing in multiple voices… Brennan expertly maintains the balance that makes this commentary fun and informative, without pulling you from the actual story. It’s a brilliant touch that brings a level of authenticity to the memoir-style…’ — Fantasy Faction on A NATURAL HISTORY OF DRAGONS

‘THE TROPIC OF SERPENTS is in part a fantasy travelogue, a guided tour of a world aslant from our own. It is also, in its way, a very science-fictional fantasy novel: it is in love with the idea of discovery, of knowing the world, of knowledge for the sake of knowledge… a thoroughly enjoyable book. I recommend it without hesitation.’ — Tor.com

‘The third installment in Lady Trent’s series of reflective memoirs does not disappoint. Isabella’s familiar audacity as she circles the globe in search of unfamiliar dragons – with her son by her side, no less – makes for an enchanting story. And the romantic interest she finds in Suhail is a much welcome addition.’ — RT Book Reviews on THE VOYAGE OF THE BASILISK

Titan is also publishing Marie’s Onyx Court series, which includes MIDNIGHT NEVER COME, IN ASHES LIE and the upcoming A STAR SHALL FALL.