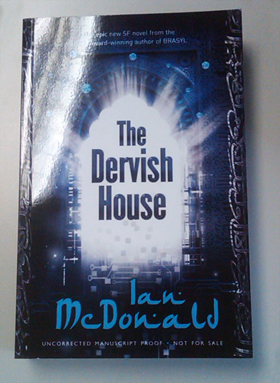 ‘In the CHAGA novels McDonald brought an Africa in the grip of a bizarre ailien invasion to life, in RIVER OF GODS he painted a rich portrait of India in 2047, in BRASYL he looked at different Brazils, past present and future. Ian McDonald has found reknown at the cutting adge of a movement to take SF away from its British and American white roots and out into the rich cultures of the world. THE DERVISH HOUSE continues that journey and centres on Istanbul in 2025. Turkey is part of Europe but sited on the edge, it is an Islamic country that looks to the West. THE DERVISH HOUSE is the story of the families that live in and around its titular house, it is at once a rich mosaic of Islamic life in the new century and telling novel of future possibilities.’

… and as if that wasn’t enough, we also received today two copies of US the mass market edition of Freda Warrington‘s ELFLAND, published by Tor with a cover rosette that loudly and proudly advertsises the fact that the book is the winner of the RT Book Reviews Reviewers’ Choice Award for Best fantasy Novel of 2009. Congratulations to Freda! 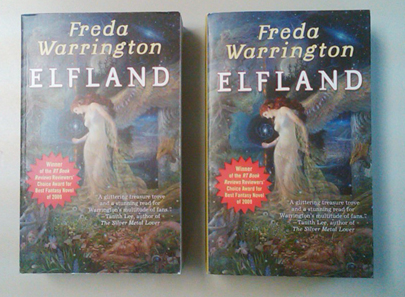 ‘This dreamlike, nuanced and sensual novel is reminiscent of the best of early Charles de Lint and is compulsively readable. Rose is a memorable, unique and wholly sympathetic protagonist, and the supporting cast is equally well drawn. The story of Rose and Sam is compelling, enchanting and utterly enthralling. This is simply one of the best fantasy novels of the year.’ — RT Book Reviews