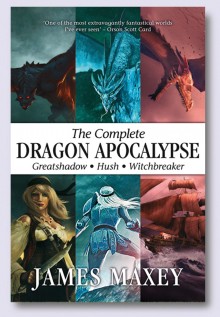 Solaris Books has collected James Maxey‘s critically-acclaimed Dragon Apocalypse trilogy in an eBook omnibus. The omnibus is now available in both the UK and US, and collects GREATSHADOW, HUSH, and WITCHBREAKER.

Here is the synopsis for book one…

The warrior known as Infidel (Princess Innocent Brightmoon, to a very, very few) is legendary – as much among the drunkards of Commonground as among heroes and bards – for her superhuman strength and skin tough as mail. Stagger, her long-time friend and closest companion, is a wastrel and a sot, but a gifted scholar. Sorrow, a powerful and possibly deranged witch, will stop at nothing – including mutilating her own body – in her pursuit of a fairer, more just world.

Once, dragons covered this world, warring with each other for dominance over great territories. In aeons past, however, their numbers dwindled, and the few that remained withdrew from mundane affairs, claiming the very primal forces of the world – fire, cold, storms, plants, the sun, wild beasts, even the principle of decay itself – as their own. Now the powerful Church of the Book has set its sights on destroying the primal dragons and freeing humanity of their supposed ‘tyrrany’ forever. Wearying of the mercenary life after Stagger’s death, Infidel – with an eye on the dragons’ celebrated wealth – agrees to take part in their first expedition.

But the primal dragons are not to be tackled lightly. In the most hectic, touching romp since The Princess Bride, Infidel, Stagger (or his ghost) and Sorrow will find their lives, and the world around them, changing beyond their grasp as the Church’s hubris reaps its rewards…

‘It’s very rare to find a novel packed to the brim with heart-pumping action, laugh out loud humour, and a protagonist who wants cake. GREATSHADOW is a brilliant book… It has a great premise, great characters, great secondary world, great world-building, great pacing, great everything. This is pretty much a perfect book for me, because I loved everything about it, and hated nothing.’  —  Founding Fields

‘GREATSHADOW was a fabulous read, which kept me turning pages and just finishing one more chapter before doing whatever I was supposed to do. Besides, any story that can legitimately clothe its main character in a chain mail bikini and make it functional can only be genius! If you like straight up adventure novels, kick ass heroines and dragons – lots of dragons – then you can’t miss GREATSHADOW. I know I’m already impatient for the second book in the series called HUSH.’  —  Fantastical Librarian

‘GREATSHADOW is a clever, funny, goofy read… This isn’t your bog-standard intro quest: GREATSHADOW is a skip-to-the-back-of-the-book epic-level adventure … level 30+ adventure is charming, not po-faced, with a group of flawed, sarcastic, quick-witted and oddball adventurers that are equally comfortable with set-piece battle and rapid fire sarcasm.’  —  Pornokitsch

‘… the most original and colorful fantasy world I have encountered in recent memory… Maxey has talent and just as importantly (and even more rare) is that he can generate truly novel ideas. As a sequel, HUSH expands upon the world introduced in the first book.’  —  Elitist Book Reviews

‘There is a growing trend for fantasy novels to be grim, gritty and filled with knights who swear and monsters so evil that they take all the joy out of being scary and are simply nasty. Luckily, HUSH isn’t one of those books; it’s a fun, well-thought out fantasy romp which is packed with clever one-liners and plenty of action… Maxey proves that fantasy doesn’t have to be po-faced and serious in order to be fun, whilst at the same time tells a story with depth and emotion… intelligent fantasy that doesn’t waste it’s time trying to prove how smart it is… feeds the reader with plenty of fuel for the imagination whilst delivering on its promise of action and fun…  it’s an exceptionally well done example of its genre, and a breath of fresh air for anyone sick of swords and sorcery stories covered in mud, blood and misery.’  —  Starburst