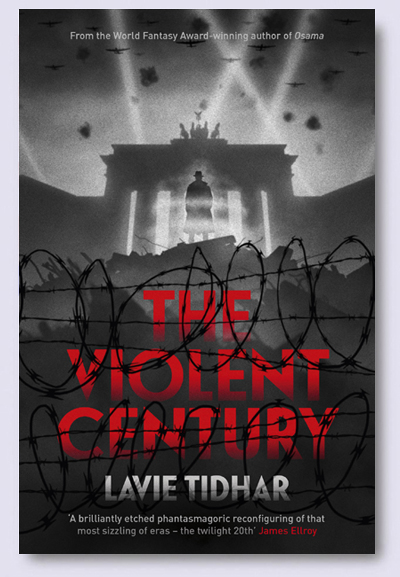 Lavie Tidhar‘s critically-acclaimed latest novel, THE VIOLENT CENTURY, is out today in MMPB (published by Hodder). In case you’ve somehow managed to miss the buzz surrounding the book, here is the synopsis…

For seventy years they guarded the British Empire. Oblivion and Fogg inseparable friends bound together by a shared fate. Until one night in Berlin in the aftermath of the Second World War and a secret that tore them apart.

But there must always be an account… and the past has a habit of catching up to the present.

Now recalled to the Retirement Bureau from which no one can retire Fogg and Oblivion must face up to a past of terrible war and unacknowledged heroism – a life of dusty corridors and secret rooms of furtive meetings and blood-stained fields – to answer one last impossible question: What makes a hero?

And also, some of the incredible praise it’s received…

‘A brilliantly etched phantasmagoric reconfiguring of that most sizzling of eras – the twilight 20th…  This book has it all:  time travel, political intrigue, hellacious history…  You’ve got superheroes in the guise of regular humans, you’ve got World War II … THE VIOLENT CENTURY is a torrid tour de force!’  —  James Ellroy

‘THE VIOLENT CENTURY… may be his best yet: a blistering alt-historical retelling of a 20th century lousy with superheroes.’  —  The Guardian, Best SFF of 2013

‘While perhaps not as politically loaded as OSAMA, Tidhar’s THE VIOLENT CENTURY… is no less powerful. He imagines a world where superheroes are real. But while the Americans go for the brash costumes and public displays of power, Tidhar’s British heroes – primarily Oblivion and Fog – operate in the shadows, and bear witness to the major events of the 20th century in what is quite simply a stunning masterpiece.’  —  The Independent

‘… like Watchmen on crack… the great strength of the book: Tidhar’s examination not of what makes a hero, but how we perceive our heroes… While Tidhar looks at the violent narrative of the twentieth century, he has his eyes firmly planted on how we’ve interpreted the violence in our own real world… There [have] been a number of fantastic novels that have drawn on the mythos of the comic book world, ranging from Michael Chabon’s The Amazing Adventures of Kavalier and Clay to Austin Grossman’s Soon I Will Be Invincible, but Tidhar’s is probably one of the best prose examinations to really examine the superhero and what they mean… Ultimately, THE VIOLENT CENTURY is about legacy and how heroics play into it, a deeper message than defining what heroics mean…‘  —  io9.com

‘THE VIOLENT CENTURY is what you’d get if Cormac McCarthy wrote a mash-up of Watchmen and Casablanca. It’s a classic World War II film, cold-war spy thriller and superhero story all rolled into one tightly written package… an amazing book and as my first introduction to Lavie Tidhar’s writing I couldn’t have asked for anything better… I’d highly recommend this book to anyone.’  —  J For Jetpack