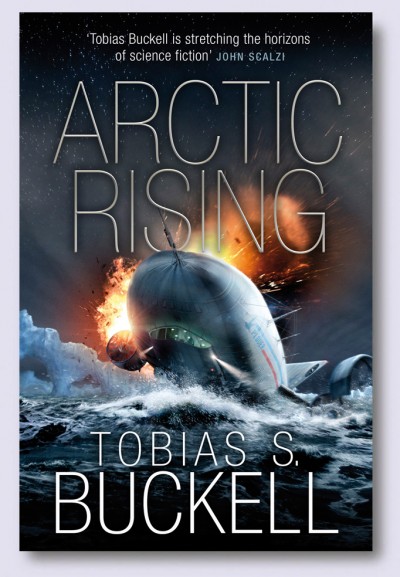 We are thrilled to welcome Tobias Buckell as a new client, representing him in the UK and Commonwealth on behalf of our colleagues at the JABberwocky Literary Agency in New York. We have long been an admirer of this fantastic author’s work.

As if this news alone were not cause for celebration, we can also reveal that Del Rey UK will be publishing Tobias’s most recent novel, ARCTIC RISING, this coming July, with a follow-up, HURRICANE FEVER, likely to appear next year. Check out the stunning Del Rey cover artwork, rendered by super-talented artist, Lee Gibbons.

This exciting and topical novel has recently been nominated for the Prometheus Award, which every year celebrates books that ‘examine the meaning of freedom’. The winner will be announced over the Labor Day weekend at LoneStarCon3, the 2013 World Science Fiction Convention, and we wish Tobias the best of luck!

Global Warming has transformed the Earth, and it’s about to get even hotter. The Arctic Ice Cap has all but melted, and the international community is racing to claim the massive amounts of oil beneath the newly accessible ocean. Enter the Gaia Corporation. Its two founders plan to terraform Earth to save it from itself—but in doing so, they may have created a superweapon the likes of which the world has never seen. Anika Duncan, a pilot for the United Nations Polar Guard, finds herself caught up in a plot by military agencies and corporations who want the Gaia Corporation stopped. But when Gaia loses control of its superweapon, it will be Anika who has to decide the future of the world.

Tobias Buckell is the author of, among others, the popular Xenowealth series (CRYSTAL RAIN, RAGAMUFFIN and SLY MONGOOSE) and HALO: THE COLE PROTOCOL. Buckell’s previous novels have been described as ‘stretching the horizons of science fiction’ (John Scalzi), ‘vividly imagined… finely tuned and engrossing’ (Booklist) and ‘compulsively readable’ (Maclean’s).