We’re delighted to announce a new deal for Lavie Tidhar. Here’s the official announcement from the publisher…

Anne Perry has acquired World English rights to two books by Lavie Tidhar, for the ongoing speculative fiction initiative at Hodder. The deal was negotiated by Tidhar’s agent, John Berlyne at the Zeno Agency. 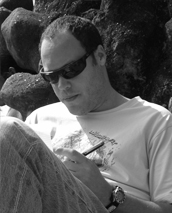 Tidhar recently won the 2012 World Fantasy Best Novel Award for his novel OSAMA. He is one of the rising young stars of the genre world; in addition to OSAMA (which has been shortlisted for or won numerous prizes, including the BSFA award for best novel, the John W. Campbell best novel award, and the Kitschies’ Red Tentacle), Lavie has also writtenTHE BOOKMAN HISTORIES, an historical fantasy trilogy published by Angry Robot, numerous novellas, short stories and even a comic-book.

Tinker, Tailor, Soldier, Spy meets Watchmen in Tidhar’s THE VIOLENT CENTURY, the thoughtful and intensely atmospheric novel about the mystery, and the love story, that determined the course of history itself. THE VIOLENT CENTURY is the sweeping drama of a time we know too well; a century of fear and war and hatred and death.  In a world where everyday heroes may become übermenschen, men and women with extraordinary powers, what does it mean to be a hero? To be a human? Would the last hundred years have been that much better if Superman were real?

Would they even have been all that different?

John Berlyne says: ‘This deal tops off what has been a most incredible 2012 for Lavie. With THE VIOLENT CENTURY, this fearless young author further establishes himself as a unique voice in modern fiction and I’m delighted that Hodder will be publishing.’

Anne Perry says: ‘In the last few years, Lavie has undertaken staggeringly ambitious projects – OSAMA, after all, is a novel about a world in which Osama bin Laden is the  villain in  a series of pulp novels – and made them work. With THE VIOLENT CENTURY, however, Lavie has reached a new level. The book demonstrates the maturity, the confidence, and the control of an author now really hitting his stride, and I’m beyond thrilled that Lavie has chosen to publish with Hodder & Stoughton.’

Hodder have set a release date of October 2013. And look out for a limited edition of THE VIOLENT CENTURY to be published by PS Publishing around the same time. Translation and film rights are represented by Zeno.