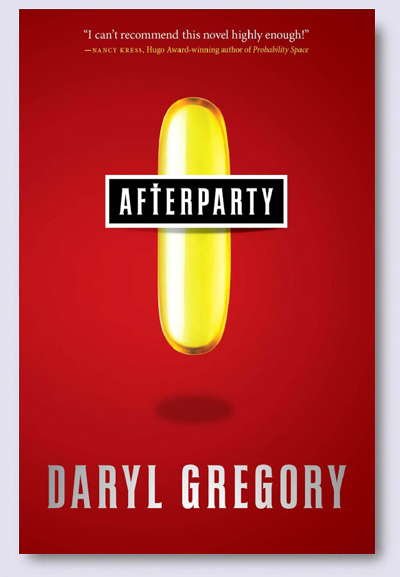 We are delighted to announce that Titan Books have picked up UK/Commonwealth rights for Daryl Gregory‘s excellent near-future science-fiction thriller AFTERPARTY!

It begins in Toronto, in the years after the smart drug revolution. Any high school student with a chemjet and internet connection can download recipes and print drugs, or invent them. A seventeen-year-old street girl finds God through a new brain-altering drug called Numinous, used as a sacrament by a new Church that preys on the underclass. But she is arrested and put into detention, and without the drug, commits suicide.

Lyda Rose, another patient in that detention facility, has a dark secret: she was one of the original scientists who developed the drug. With the help of an ex-government agent and an imaginary, drug-induced doctor, Lyda sets out to find the other three survivors of the five who made the Numinous in a quest to set things right.

A mind-bending and violent chase across Canada and the US, Daryl Gregory’s Afterparty is a marvelous mix of William Gibson’s Neuromancer, Philip K. Dick’s Ubik, and perhaps a bit of Peter Watts’s Starfish: a last chance to save civilization, or die trying.

AFTERPARTY is due to be published in the US by Tor Books in April. As soon as we have a confirmed UK publishing date, we’ll be sure to share the information with you on here – so keep your eyes on the blog and the agency Twitter. Here’s a sample of the advance praise the novel has been receiving…

‘AFTERPARTY is a great giggling psychedelic trip down the big pharma rabbit hole to a place where designer drugs hack the human mind for its limitless potential, and madness, empathy, talking teddy bears and the face of God are all just a hit away. Load up the pharmaceutical printer, drop Daryl Gregory’s words on your tongue, and get ready to trip hard.’ — Paolo Bacigalupi (Hugo and Nebula Award Winning author of The Windup Girl)

‘Brain-stretching speculation in brain science and metaphysics, built on a solid cyberpunk foundation. I really liked this one.’ — Walter John Williams

‘Every new novel by Daryl Gregory goes to the top of my reading pile. AFTERPARTY is his best yet, combining interesting ideas about religion and the brain with the distinctive Gregory brand of wit and the superb Gregory writing. I can’t recommend this novel highly enough!’ — Nancy Kress (Hugo and Nebula Award-winning author of Beggars from Spain)

‘Daryl Gregory’s AFTERPARTY is why we write science fiction: to explore issues, to tackle themes, to provoke, and, yes, to entertain. It’s all here in a page-turner about big ideas, a thriller about moral choices, a breathless ride into a down-and-dirty tomorrow.’ — Robert J. Sawyer (Hugo Award-winning author of Red Planet Blues)

‘Daryl Gregory’s AFTERPARTY is almost certainly the only novel you’ll read this year which calls to mind both Huxley’s The Doors of Perception and the damaged tough guys of contemporary crime fiction; both Philip K. Dick and Tony Kushner. The very satisfying result is likely to prove his most popular novel.’ — Gary K. Wolfe, LOCUS

Zeno represents Daryl Gregory in the UK and Commonwealth on behalf of the Martha Millard Literary Agency in New York.