Zeno clients triumphed at the BSFA awards, which were held at this year’s Eastercon, at the Hilton Metropole in Birmingham over the Easter weekend. 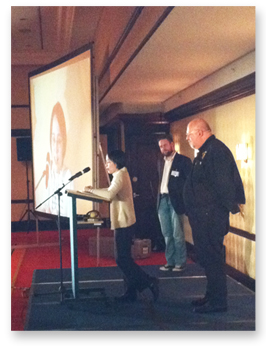 First up was Aliette de Bodard, who was on hand to collect the award for Best Short Fiction for her story The Shipmaker, which appeared in Interzone issue #231. I managed to snap this pic of her being dwarfed by David Weber, who was on hand the present the award. (The homeless man to the rear is Paul Cornell prior to the removal of his comedy charity beard – for which he raised an impressive amount of money for, ironically, Shelter!)

No sooner had the applause for Aliette died down than our own Ian McDonald took to the stage to accept for the award for Best Novel for THE DERVISH HOUSE (not ‘The Dervish Nights’ as the convention newsletter later reported!), his 2010 novel published by Gollancz in the UK and by Pyr in the US.

A further layer of coolness was added to these wins when we later learned that both Ian and Aliette have been nominated for this year’s Hugo Awards – this news adding to Aliette’s previously reported Nebula nomination for the same story, and Ian’s Arthur C. Clarke Award nomination.

Huge congratulations to both authors. 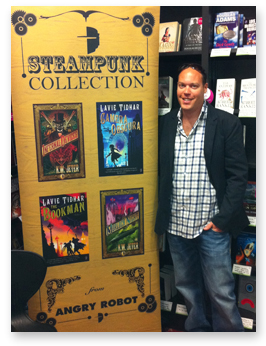 There were lots of other Zeno authors at Eastercon – I got to meet our latest clients Anne Lyle and David Tallerman, albeit all too briefly, and the mass signing of Angry Robot authors at Waterstones in the centre of Birmingham was almost a mini ‘Zenocon’ of its own. Present were Aliette, Colin Harvey, John Meaney – or was it Thomas Blackthorn? – and, in a rare UK appearance, one Lavie Tidhar (pictured here next to a banner proclaiming his novels in all their steampunky glory.)

Elsewhere at the con, at readings, on panels and if truth must be told, in the bar, one could find Freda Warrington, Susan Boulton, Michael Cobley and last but by no means least Ian R. MacLeod.

I did a panel called ‘Writing 102: Finding an Agent‘, which was well attended and along with Gollancz Editorial Director Gillian Redfearn, Gollancz author Stephen Deas and author Martin Owton, we fielded a number of excellent questions from the audience. Hope those who were there found it helpful.