Posting to the agency web site has been sporadic of late, entirely down to time constraints. Aside from the aftermath of Worldcon, there has been the Frankfurt Book Fair, the processing of the bi-annual royalties (a tough job, but the one of the reasons we’re here, I guess!) prep for this year’s World Fantasy Convention (in Columbus, OH) and a subsequent week of meetings in NYC and the fact that we’ve been to a number of rather nice parties! That said, here’s a little news…

And we’ve a couple of other Angry Robot covers to show off here – on the left is Colin Harvey‘s DAMAGE TIME, a seat of the pants, SF thriller from the author of WINTER’S SONG. This new one by Colin has just been released by AR and in a recent Guardian review was described thus by Eric Brown ‘The strength of the novel lies not only in the depiction of a detailed future of hardship and privation, but in the expert characterisation of [protagonist] Shah: a lone figure whose origins leave him open to prejudice within the police department, and whose problematic relationship with an intersexual courtesan reveals his own deep-seated prejudices.‘ 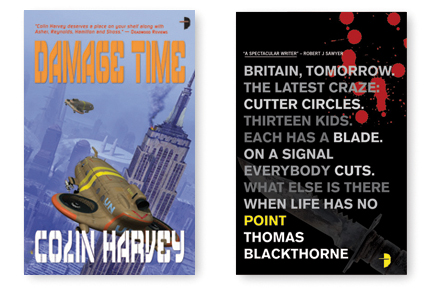 And to the right, we’ve the cover for POINT by Thomas Blackthorn (a.k.a John Meaney), not due out until Feb 2011 and which looks rather splendid when placed next to EDGE, the first Blackthorn novel. Swapping identities and publishers for a moment, John reports he has just completed the second Ragnarok novel for Simon Spanton at Gollancz… more on that in due course.