The third novel in Ian McDonald‘s critically-acclaimed Luna series, MOON RISING, is due to be published by Gollancz in the UK on March 21st! Above you can see the eye-catching cover. The latest in Ian’s epic Sci-Fi trilogy of corporate greed and family betrayal set in the harsh environment of Earth’s Moon, here’s the synopsis…

A hundred years in the future, a war wages between the Five Dragons—five families that control the Moon’s leading industrial companies. Each clan does everything in their power to claw their way to the top of the food chain—marriages of convenience, corporate espionage, kidnapping, and mass assassinations. 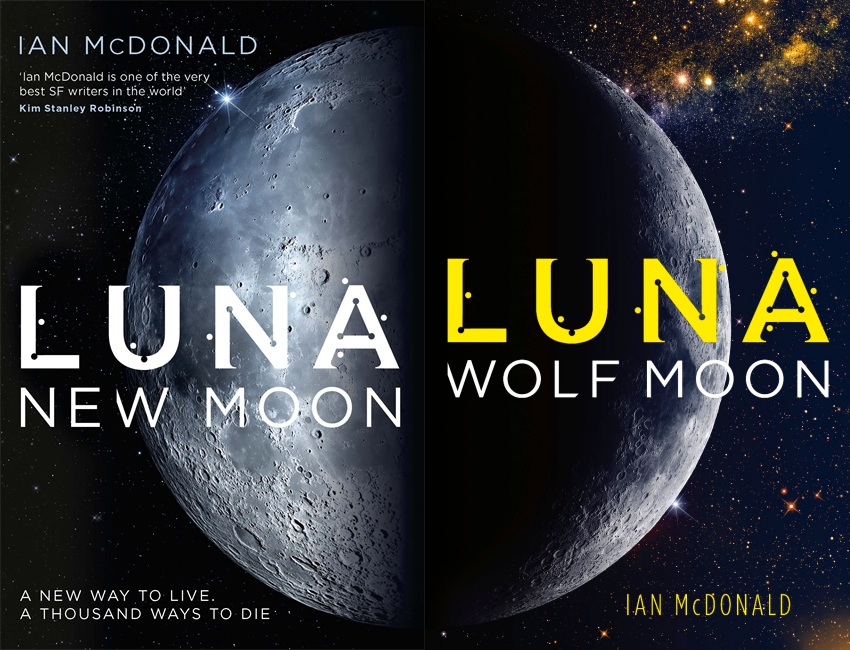 If you would like to read an excerpt from the novel, head on over to Tor.com.

‘The best moon novel I’ve seen in many years… McDon­ald’s novel has some formidable SF stingers not far beneath its densely textured surface.’ — Locus on NEW MOON

‘With an action narrative driving this political commentary, Luna is actually a fantastically fun read as well as an important one.’ — Los Angeles Review of Books on NEW MOON

‘An engaging thriller… McDonald’s portrait of a cutthroat society trying to survive in the deadliest of environments also make it one of the strongest science fiction novels of the year.’ — Chicago Tribune on NEW MOON

‘The fights and vengeance that follow are more vicious and intricate than anything in Game of Thrones, full of great acts of self-sacrifice and viciousness alike, brave cavalry charges and last stands, cowardice and avarice.’ — Boing Boing on WOLF MOON

‘Each of McDonald’s viewpoint characters is made human in fascinating and occasionally disturbing detail, and the solar system of the 22nd century is wonderfully delineated.’ — Publishers Weekly (Starred Review) on WOLF MOON

‘Spare, simple, elegant when he needs to be…deep and meaty when he wants to be… [Mcdonald] does his work like an artisan pulling a sculpture from stone.’ — NPR on WOLF MOON