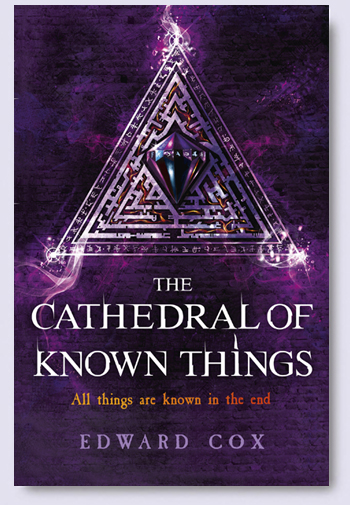 Edward Cox‘s THE CATHEDRAL OF KNOWN THINGS, the anticipated sequel to THE RELIC GUILD, is out in the UK this Thursday (October 15th)! Published by Gollancz, here’s the synopsis…

In the end, all things are known. Return to the world of THE RELIC GUILD with this remarkable fantasy novel

Divided, hunted and short on resources, the surviving members of the Relic Guild are in real trouble. Their old enemy, the Genii, and their resurrected master have infiltrated Labrys Town and taken over the police force.

So the Relic Guild must flee their home, and set off on a dangerous journey across the worlds of the Aelfir. One that will lead them to a weapon which might destroy the Genii. Or the whole universe…

And forty years before all this, the war which led to the fall of the Genii continues. And what happens to the Relic Guild during that conflict will change the course of their desperate flight.

THE RELIC GUILD enjoyed a great critical response when it was published last year. Here are just a few of the reviews…

‘An intriguing, original and enjoyable book, a daring mix of genres that initially feels like it shouldn’t work, but is ultimately greater than the sum of its parts.’ — Starburst

‘Part science fantasy, part steampunk thriller, part horror novel… THE RELIC GUILD reads in places like a vividly-described high fantasy merged with Victorian penny dreadful ‘appening… colourful characters… Cox has written a mighty fine first novel… I was hooked and enjoyed the world that Cox has created and the characters that inhabit it, and look forward to stepping into “the darkness that leads somewhere else” and see what happens on the other side in book two.’ — Interzone

‘A high concept fantasy packed with ideas, weird and wonderful characters and a mix of styles, at times evoking noir, urban fantasy, flavours of steampunk (in the depiction of anachronistic technology) and grotesque body-horror David Cronenberg would be proud of. Thought you knew where modern fantasy was at? THE RELIC GUILD will challenge your assumptions.’ — British Fantasy Society

‘If you like your fantasy gothic (though not overly grimdark) in atmosphere, populated by interesting and varied characters, and a fast-but-not-rushed pace, then THE RELIC GUILD is for you. I really enjoyed this, and can’t wait for the second in the series, and to see how the characters, world and story develop. Highly recommended.’ — Civilian Reader

‘Engrossing… a lot to like—especially the setting… what little we see of it and its surroundings is striking, and the way in which the world works its way into the magic system whilst the magic system works its way into the world imbues both elements with a certain significance… a number of other highlights, as it happens—not least the concept of the Resident and the Orwellian workings of the Nightshade—whilst what little action there is is smartly handled… Cox’s prose is never less than pleasant… the beginning of his debut is borderline brilliant… A solid start…’ — Tor.com