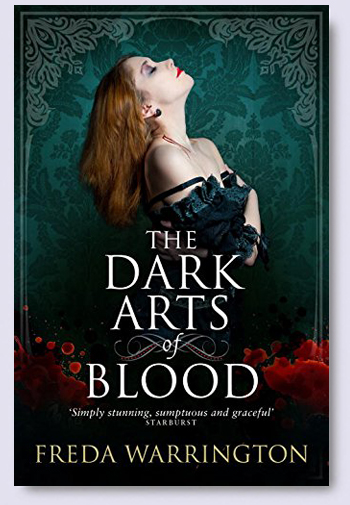 Freda Warrington‘s long-awaited and highly-anticipated fourth Blood Wine novel, THE DARK ARTS OF BLOOD, is published tomorrow in the UK! The novel is published by Titan Books. Here’s the synopsis…

1927: In the turmoil and glamour of 1920s Europe, vampires Karl, Charlotte and Violette face threats to their very existence. Fiery, handsome dancer Emil achieves his dream to partner the legendary ballerina Violette Lenoir – until his forbidden desire for her becomes an obsession. Rejected, spiralling towards madness, he seeks solace with a mysterious beauty, Leyla. But she too is a vampire, with a hidden agenda…

Is Leyla more dangerous than the sinister activist, Goderich Mann? When Karl and Charlotte undertake an exotic, perilous journey to rescue Emil, they unearth secrets that threaten disaster for vampire-kind.

The novel follows A TASTE OF BLOOD WINE, A DANCE IN BLOOD VELVET and THE DARK BLOOD OF POPPIES — all of which are also published by Titan Books. You can read an extract from a rare short story set in the Blood Wine universe, AND THEIR BLOOD WILL BE PRESCIENT TO FIRE, here.

‘A tale which throbs with lush romanticism.’ — The Times on A TASTE OF BLOOD WINE

‘A really, really splendid read… Warrington shows her writer’s chops, layering in exquisite period detail. Sometimes the effect is playfully satirical… but more often it’s lusciously picturesque… Freda Warrington is like a cross between Anne Rice and Kim Newman – she has the sweep of one, the cleverness of the other… not to be missed.’ — Starburst on A TASTE OF BLOOD WINE

‘I would like to reaffirm what I said before about the writing: it’s splendid, and by that I mean the style is genuinely drop-dead beautiful with a compelling elegance and subtly romantic bent — in a word, it’s seductive. In three words: charming, graceful and all-round lush.’  —  British Fantasy Society on A DANCE IN BLOOD VELVET

‘A full-blooded gothique that rips more than bodices… Warrington’s vampire dynasty has the grandeur of a cobwebbed cathedral, and her plot is forged in operatic passions. Treating her subjects with theatrical intensity, she creates lush images, awash in colour and shadow, and the ideal gothic mood is preserved; a dark romance to lose yourself in.’ — Time Out on A DANCE IN BLOOD VELVET

‘The third book in Freda Warrington’s brilliantly evocative Blood Wine Sequence, and for me at least, possibly one of the best… I’ve yet to end any review of one of Freda’s books without referring to the impressive style of her writing — it’s smart, compelling, and simply fabulous… So easy to recommend this…’ — British Fantasy Society on THE DARK BLOOD OF POPPIES