The mass market paperback edition of Andrew Cartmel‘s THE RUN-OUT GROOVE is published tomorrow by Titan Books in the US! The second novel in the Vinyl Detective series, here’s the synopsis…

His first adventure consisted of the search for a rare record; his second begins with the discovery of one. When a mint copy of the final album by “Valerian” — England’s great lost rock band of the 1960s — surfaces in a charity shop, all hell breaks loose.

Finding this record triggers a chain of events culminating in our hero learning the true fate of the singer Valerian, who died under equivocal circumstances just after — or was it just before? — the abduction of her two-year-old son.

Along the way, the Vinyl Detective finds himself marked for death, at the wrong end of a shotgun, and unknowingly dosed with LSD as a prelude to being burned alive. And then there’s the grave robbing…

But he does find out what happened to the missing child, and it wasn’t what anyone expected — or wanted — to hear.

Titan Books has also published the first and third novels in the series — WRITTEN IN DEAD WAX and VICTORY DISC. Check back on Friday for details of the upcoming, fourth novel in the series! 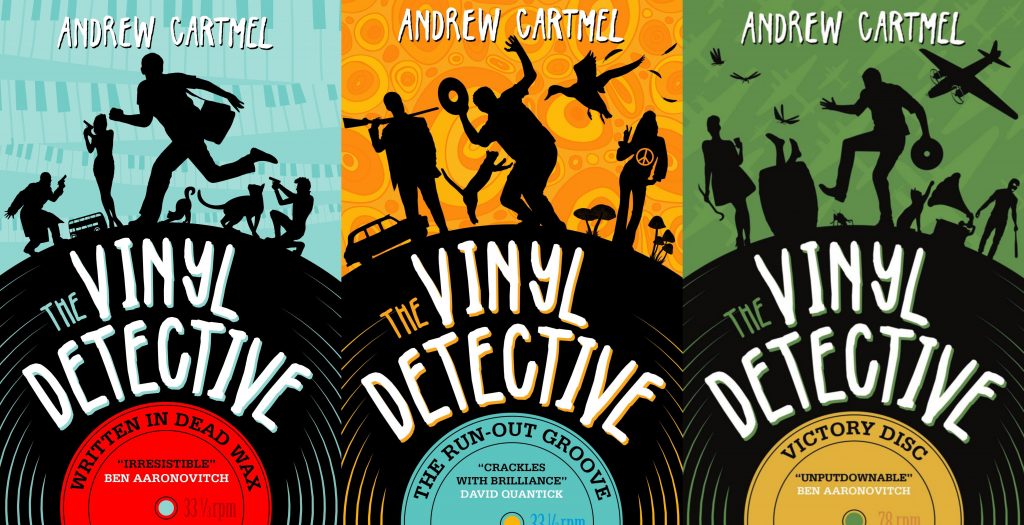 In the meantime, here are just a few of the reviews the series has received so far…

‘This charming mystery feels as companionable as a leisurely afternoon trawling the vintage shops with a good friend.’ — Kirkus

‘The story is so charming, funny and engaging… There is a wonderful sense of time and place, each location filled with a varied cast of colourful characters… There is an engaging tapestry of technical information and jazz history being woven throughout… The Vinyl Detective has it all… intrigue, mystery, romance, action, travel, humour, music, history… It’s the perfect chilled-out read… It’s British crime fiction with an American jazz soundtrack and it’s delightful.’ (9/10) — Alternative Magazine Online on WRITTEN IN DEAD WAX

‘Cartmel at his best… an exciting and atmospheric mystery and a good addition to the Vinyl Detective’s casebook.’ — Blue Book Balloon on VICTORY DISC