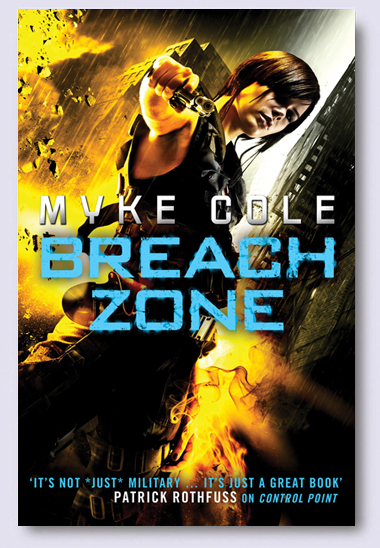 We’re excited to announce that the third novel in Myke Cole‘s critically-acclaimed Shadow Ops series, BREACH ZONE, is now out in the UK! Published by Headline, it follows CONTROL POINT and FORTRESS FRONTIER. To the right you can see the frankly stunning cover by Larry Rostant.

The Great Reawakening did not come quietly. Across the country and in every nation, people began “coming up Latent,” developing terrifying powers—summoning storms, raising the dead, and setting everything they touch ablaze. Those who Manifest must choose: become a sheepdog who protects the flock or a wolf who devours it…

In the wake of a bloody battle at Forward Operating Base Frontier and a scandalous presidential impeachment, Lieutenant Colonel Jan Thorsson, call sign “Harlequin,” becomes a national hero and a pariah to the military that is the only family he’s ever known.

In the fight for Latent equality, Oscar Britton is positioned to lead a rebellion in exile, but a powerful rival beats him to the punch: Scylla, a walking weapon who will stop at nothing to end the human-sanctioned apartheid against her kind.

When Scylla’s inhuman forces invade New York City, the Supernatural Operations Corps are the only soldiers equipped to prevent a massacre. In order to redeem himself with the military, Harlequin will be forced to face off with this havoc-wreaking woman from his past, warped by her power into something evil…

Myke’s Shadow Ops series has been widely praised by his peers and critics. Here’s just a taste of what’s been said about his novels…

‘BREACH ZONE is the work of an author confidently knocking it out of the park, juggling the fate of the world with real characters with personal agendas that you actually care about. This isn’t just some superhero slugfest with all-American heroes trading blows with evil forces – at its heart it’s a love story of two people pulled apart by forces beyond their control, both trying to do the right thing no matter what the personal cost to themselves in the most horrible of circumstances. And again it’s a testament to Cole’s ability that the intimate moments are just as compelling as the man against monster encounters, if not more so… Exciting and emotional, a page-turner in every sense of the world.’  —  Fantasy Faction

‘While I was expecting improvement over his last effort, Cole delivers a novel so much better than his last that there is no doubt that he’s earned his place as one of the most watched authors in the genre. With pulse hammering action around every corner this novel could have become just a sequence of strung together set pieces with magic and missiles flying, but Cole layers the narrative with hard truths about duty and service, community and redemption. BREACH ZONE has a giant heart inside its bruised and battered chest and that’s the real key to its success.’  —  52 Book Reviews

‘Cole wraps up the Shadow Ops trilogy with a magical battle royale… This action-filled, adrenalin-powered adventure, which enthusiastically embraces the tropes of tales about meta-powered minorities and the distrusting majorities who oppress them, provides a fitting end for the trilogy.’  —  Publishers Weekly

…  the portrayal of combat in this novel (in all of Cole’s novels) remains breathtaking and horrifying in equal measure. Both previous books had action in spades and, once again, Cole doesn’t disappoint. We get combat at sea, in the air, on land, all described with just enough attention to detail that allows the pace to stay absolutely breakneck. Add to that the seamless integration of magic and, well, it’s really quite good… I can’t wait to see what Myke Cole publishes next.’  —  The Eloquent Page

‘… this is the best thing Cole has published to date… This is a novel with romance, regret, failure, and betrayal. And it’s executed brilliantly… To me, BREACH ZONE is Myke Cole’s coming out party. He’s not a one note writer with linear plots and wiz bang action sequences. He’s someone who dares to be better every time he puts pen to page and it’s showing in his work.’  —  Staffer’s Book Review

‘Cole’s definitely got a hit on his hands. He’s found that perfect recipe, incorporating magic, military, and mayhem without sacrificing either realism or the sense of wonder. I can’t wait to see what comes next.’  —  Tor.com

‘Cross The For­ever War with Witch­world, add in the real world mod­ern mil­i­tary of Black Hawk Down, and you get Control Point, the mile-a-minute story of some­one try­ing to find pur­pose in a war he never asked for.’  —  Jack Campbell (New York Times bestselling author of the Lost Fleet series)

‘CONTROL POINT is Black Hawk Down meets the X-Men. Fast-paced and thrilling from start to fin­ish, CONTROL POINT is mil­i­tary fan­tasy like you’ve never seen it before. Cole’s wartime expe­ri­ence really shows in the gritty real­ity of army life, and in the explo­ration of patri­o­tism as the pro­tag­o­nist wrestles with the line between the law and what he sees as right.’  —  Peter V. Brett (Bestselling author of THE WARDED MAN)