Continuing our series of Review Round-Ups, fan-favourite Myke Cole’s second novel, FORTRESS FRONTIER, has been receiving a huge amount of positive attention. We’re delighted to represent Myke in the UK and British Commonwealth on behalf of our collegues at the JABberwocky Literary Agency in New York. 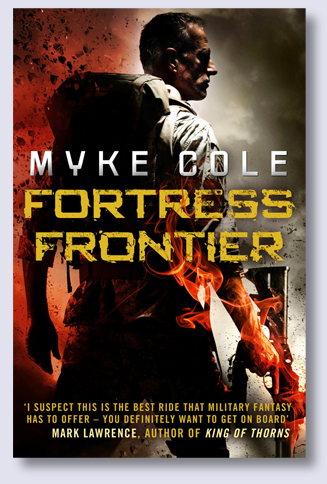 FORTRESS FRONTIER is out now in the UK, published by Headline, and in support of publication, Myke has been a most visible presence online – read, for example, this excellent interview on Mad Hatter’s Book Review. The word on the street is that while the first novel in this exciting action series, CONTROL POINT, was viewed as a very solid debut, FORTRESS FRONTIER further impresses in almost every way (see this review at Civilian Reader, for example), with particular attention paid to the greater world-building (see Bookworm Blues), which reviewers say promises to ‘remain fresh for a long time… and keep readers entertained for a long time to come‘ (via Fantasy Book Critic). Here are some of the other highlights.

New review site, 52 Reviews, praised Cole’s ability to avoid the ‘sophomore slump‘, and suggested that he has, instead, written a sequel that ‘not only builds on the momentum and success of its predecessor but surpasses it in almost every way.’

SF Signal, in a recent review, announced that ‘this series isn’t one to be missed.’ And referring to the recent news of a new US deal for Cole, the reviewer continued ‘With four additional books on the way, there’s quite a bit set up for future stories, both on Earth and on The Source. Personally, if they’re all going to be the quality of Fortress Frontier, I’m already impatient for the next one.‘

Fantasy Faction clearly hated FORTRESS FRONTIER – their reviewer only gave the book a measley ten out of ten! The reviewer said of the author, ‘While telling compelling stories, he also sets the table for bigger and better things to come. I’d be amazed to hear Hollywood hasn’t come knocking… I can’t wait to find out what happens next.’

BookThing, in another maximum score review, described the novel as ‘interesting and surprising‘, and that while CONTROL POINT was “great”, FORTRESS FRONTIER ‘is just superb. The third book can’t come along soon enough… Highly, highly recommended.’ 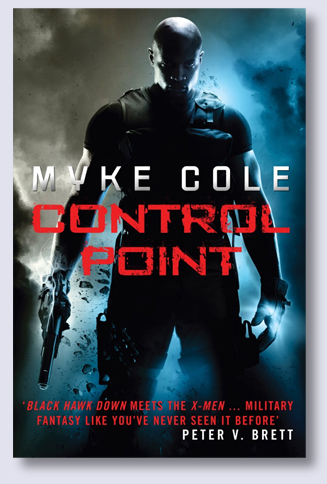 Bookworm Blues was impressed Cole’s prose, writing ‘One of the most impressive features of Fortress Frontier is how obviously Cole has grown as an author. This is only his second book, but already he has advanced with his writing as much as many very seasoned SF authors out there. Cole shows an incredible ability to time his plot perfectly. He reveals things slowly, and does a wonderful job at keeping readers hanging on until the very end. Furthermore, his prose are beautifully polished, and his characters have a more realistic, three dimensional feel.’

Genre community blog Ranting Dragon, which also hostied a giveaway to win a pair of the SHADOW OPS novels, said that ‘FORTRESS FRONTIER does everything right that geek culture ever did wrong.’ They sum up the novel  by saying ‘Fortress Frontier is a force of nature. It is a breath-taking rollercoaster ride. It is an artistic tour de force. Cole’s no-nonsense prose pulls you in and takes you for a ride through high-paced action and astonishing conflicts both military and political.’

Staffer’s Book Review shares the popular opinion that ‘For fans of military fiction and fantasy, the SHADOW OPS series is the best thing going. Not reading it would be a crime against good fiction.’

Myke was also hosted by A Dribble of Ink for whom he wrote a fascinating article entitled ‘The Peril of the Contemporary’, in which the he offered up his thoughts on Urban Fantasy, and what the genre is really about.

And, finally, in a Zeno Client two-for-one, both Myke Cole and Peter V. Brett were interviewed in a two part podcast on SpeculateSF. Do not miss it!