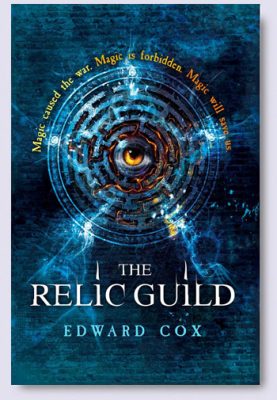 We are delighted to report that Edward Cox‘s epic debut fantasy, THE RELIC GUILD, is officially published today by Gollancz! The novel is the start of a superb, atmospheric and action-packed new series. Here’s the synopsis…

In the sealed Labyrinth, a young woman must find a way to control her magic and escape her prison in this remarkable debut fantasy.

In case that doesn’t whet your appetite, here is just a small selection of the advance praise…

‘There are many things to love about THE RELIC GUILD… an excellent story… Cox’s characters are well-realised individuals, each with a story to tell… a highly successful magic system that doesn’t require a lot of explanation and complements the setting beautifully… clever and effective, and [I] appreciated the way Cox keeps his world’s history alive and relevant to current events… THE RELIC GUILD is a formidable debut from an author with huge potential, and I will be one of the first clamouring for a copy of the sequel.’ – Fantasy Faction

‘THE RELIC GUILD was a fast and pleasurable read… [Cox] knows how to craft a tale and to write engaging characters and I’ve also loved his use of the Labyrinth as a vehicle for setting a fully immersive dystopian (with a dash of noir) atmosphere. It is a magical creation and a true feat of imagination which I’m looking forward to exploring more… A promising debut…’ – Upcoming4Me 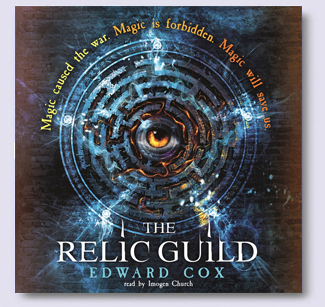 ‘… a fantasy with plenty of original ideas, where the world is detailed and dark, where the characters intrigue and delight and where the plot draws you in and takes you on a magical journey… Edward Cox’s debut novel, THE RELIC GUILD is a real page-turner of a book and I’m already impatient for the next book in the series.’ – SF Crowsnest

For those who prefer to listen to your books, THE RELIC GUILD is also out today in unabridged audio, read by Imogen Church and published by Orion Audio.

Ed is currently taking a blog tour in celebration of the release, and you can find him at the following stops:

And, finally, if you’re in London this evening, be sure to pop by Goldsboro Books, who are hosting the official launch for the novel (they also have signed, first editions in stock…).