Tomorrow, the first novel in Brandon Sanderson‘s best-selling, acclaimed Stormlight Archive series will be re-issued by Gollancz in hardcover in the uk! THE WAY OF KINGS, first published in 20, is the start of an epic fantasy story (projected to be ten volumes). This is a great opportunity for fans of the series to complete their (hardcover) collection and for newcomers to discover this awesome novel and series. Here’s the synopsis…

Roshar is a world of stone and storms. Uncanny tempests of incredible power sweep across the rocky terrain so frequently that they have shaped ecology and civilization alike. Animals hide in shells, trees pull in branches, and grass retracts into the soilless ground. Cities are built only where the topography offers shelter.

It has been centuries since the fall of the ten consecrated orders known as the Knights Radiant, but their Shardblades and Shardplate remain: mystical swords and suits of armor that transform ordinary men into near-invincible warriors. Men trade kingdoms for Shardblades. Wars were fought for them, and won by them.

One such war rages on a ruined landscape called the Shattered Plains. There, Kaladin, who traded his medical apprenticeship for a spear to protect his little brother, has been reduced to slavery. In a war that makes no sense, where ten armies fight separately against a single foe, he struggles to save his men and to fathom the leaders who consider them expendable.

Brightlord Dalinar Kholin commands one of those other armies. Like his brother, the late king, he is fascinated by an ancient text called The Way of Kings. Troubled by over-powering visions of ancient times and the Knights Radiant, he has begun to doubt his own sanity.

Across the ocean, an untried young woman named Shallan seeks to train under an eminent scholar and notorious heretic, Dalinar’s niece, Jasnah. Though she genuinely loves learning, Shallan’s motives are less than pure. As she plans a daring theft, her research for Jasnah hints at secrets of the Knights Radiant and the true cause of the war.

The result of over ten years of planning, writing, and world-building, The Way of Kings is but the opening movement of the Stormlight Archive, a bold masterpiece in the making.

Life before death.
Strength before weakness.
Journey before Destination.

… and return to men the Shards they once bore.

The Knights Radiant must stand again.

Gollancz has published the first four novels in the series — the others are: WORDS OF RADIANCE, OATHBRINGER, and RHYTHM OF WAR. 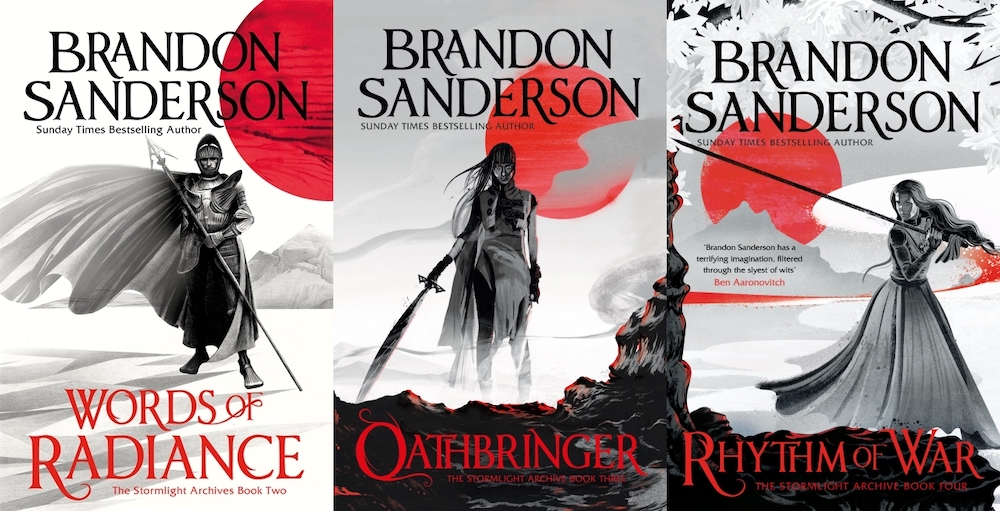 ‘Sanderson is a master […] Fans and lovers of epic fantasy will find the ending satisfying, yet will eagerly await the next volume.’ — Library Journal

‘Sanderson is […] absolutely amazing at worldbuilding. The level of detail is just astonishing […] Kaladin and Shallan’s stories are compelling and readable.’ — RT Book Reviews

‘A classic story of intrigue, magic and war, with a large cast of characters and multiple settings lovingly detailed in a way only possible in volumes of this size […] There’s wit, magic and erudition […] Readers will plunge into it.’ — Booklist

‘Brandon Sanderson is modern epic fantasy’s Grand Master, comparable only to Tolkien in scope and richness of story, and I for one hope has a long, long career.’ — Grasping for the Wind

‘Epic in every sense. Sanderson has built a world that leaps to life, a cast of varied characters, and a vast history […] while Sanderson cuts from the familiar cloth of fantasy, his narrative impetus and meticulous world-building bode well for future volumes.’ — The Guardian