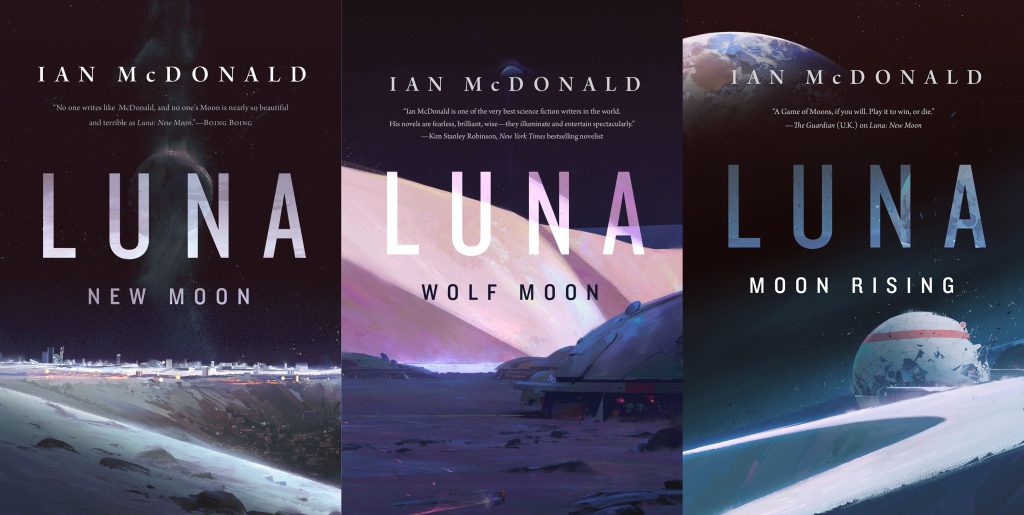 We are very happy to share the news that Ian McDonald has racked up another couple of award nominations! Announced over the past couple of weeks, read on for more details!

The third novel in Ian’s Luna series, MOON RISING, is a Prometheus Award finalist! All three of the novels in the series have been nominated for the award. Here’s what the organization had to say about the novel…

In the sequel to the Prometheus-nominated novels LUNA: NEW MOON and LUNA: WOLF MOON, McDonald dramatizes the struggle for independence and sovereignty as feuding lunar factions unite against a threat from Earth. The trilogy’s thrilling finale builds on McDonald’s intricate future of moon colonization, buoyed by somewhat free markets marred by violence, corporate espionage, and political marriages as the Five Dragons family dynasties control the main lunar industrial companies. Characters empowered by personal freedom and individual/social achievement in a society where contracts with others define people. Rendering a more positive view of a free society than earlier novels, McDonald offers justifications for freedom and markets while showing more negative aspects of politics and human behavior dealt with by people addressing inevitable problems in more voluntary ways.

The Luna series is also a finalist for the Hugo Award for Best Series! The winners will be announced as part of the 78th World Science Fiction Convention, CoNZealand, which recently announced that it will shift to a virtual format given the ongoing COVID-19 pandemic.

Congratulations Ian on these nominations!

The Luna series is published in the UK by Gollancz (covers below), in North America by Tor Books (covers above), and in a growing number of translated editions around the world.

Here’s the synopsis for MOON RISING…

‘LUNA: NEW MOON was a “magnificent bastard of a book,” as I put it in my review. Part two, it’s my pleasure to tell you, is just as awesome, and just as masterfully nasty.’ — Tor.com on WOLF MOON