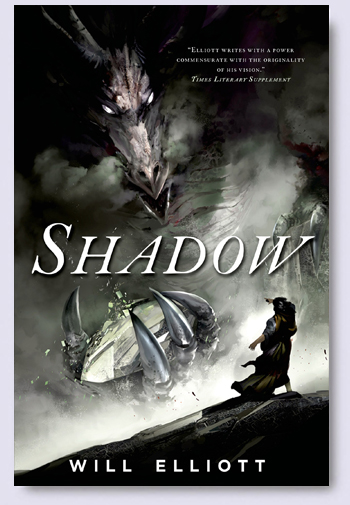 Above you can see the striking cover for Will Elliott’s SHADOW, which is due to be published in the US by Tor Books on February 24th, 2015. The second novel in the Pendulum Trilogy, here’s the synopsis…

Eric Albright was a luckless journalist living in London. He had a so-so life…until the day he opened a battered red door that appeared on the graffiti-covered wall of a local bridge, and entered Levaal, a magical world between worlds. A place populated by power damaged mages, stone giants, pit devils — and dragons, Levaal’s possible creators, who are imprisoned in a sky prison. It is also where the mad Lord Vous rules with an iron fist and is busy working on a scheme to turn himself into a god. Vous has been defeated so far because Levaal has been contained by the great Wall at World’s End.

But the Wall at World’s End has been brought down, war is coming to the land, and Eric and his newfound friends are caught in the thick of it. They are forced to flee from the Tormentors, dreadful creatures that have poured through the breach, and there are rumors that one of the great dragons has escaped its sky prison.

Worse yet, Vous’s journey to godhood is almost complete, and a mysterious being called Shadow (who is not but looks remarkably like Eric) is wandering Levaal with great power but no purpose it yet understands.

The end might be coming faster than anyone thinks.

Tor Books published the first novel in the series, THE PILGRIMS, in March 2014 (cover below). The trilogy was originally published in the UK by Jo Fletcher Books between 2012-13. 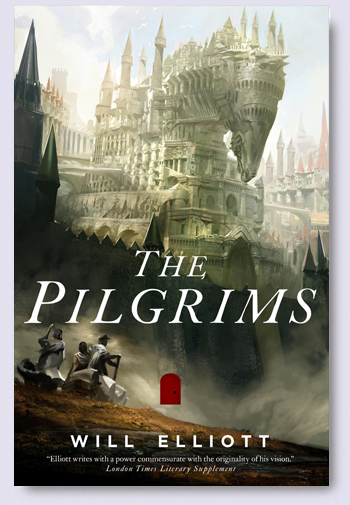 Here are the UK covers for the trilogy, including the third volume, WORLD’S END…