British-Israeli author Lavie Tidhar has been described as ‘a political writer, an iconoclast and sometimes a provocateur’ by the Review of Contemporary Fiction. Born on a kibbutz in Israel, Tidhar’s unusual childhood has inspired a life devoted in equal parts to books and to travelling. He has lived in South Africa, Laos and Vanuatu, and currently resides in London, a city he has made his home.

BY FORCE ALONE, Lavie’s reimagination of the Arthurian legend, due to be published in 2020 by Head of Zeus (UK) and Tor Books (US), has already been acquiring fans among its advance readers. 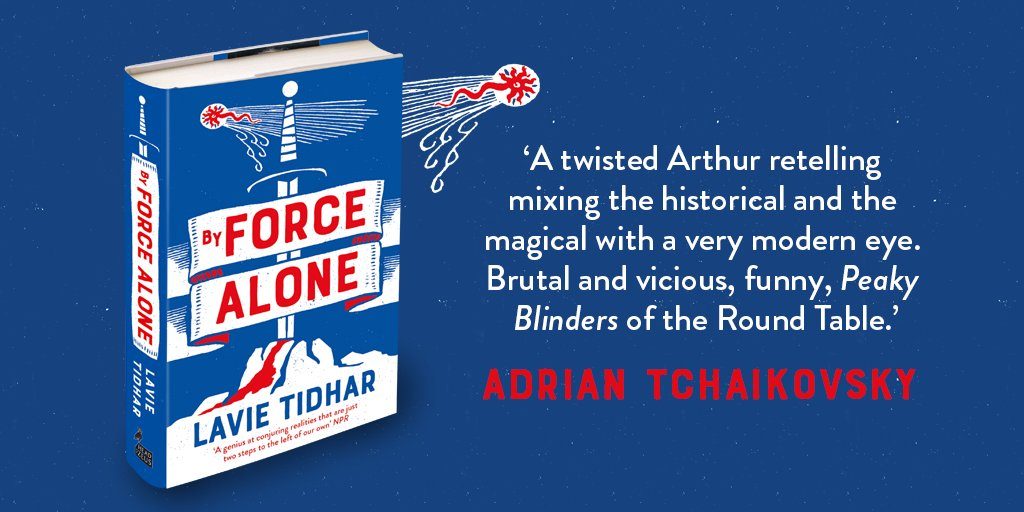 UNHOLY LAND is Lavie’s critically-acclaimed novel published in late-2018 by Tachyon. It quickly found its way onto a slew of Best Of lists, including NPR, Library Journal, Publishers Weekly, Guardian and Barnes & Noble, and collected a number of starred reviews.

CENTRAL STATION (2016) came out to rapturous reviews, with legendary SF editor Garnder Dozois declaring, ‘If you want to know what SF is going to look like in the next decade, this is it.’ The novel won the John W. Campbell Award in 2017, the Neukom Institute Literary Arts Awards in Speculative Fiction in 2018, and has also been shortlisted for the Arthur C. Clarke Award.

A MAN LIES DREAMING (2014) won the Jerwood Fiction Uncovered Prize for best British fiction, was nominated for Italy’s prestigious Premio Roma, as well as the British Fantasy Award, and was longlisted for the International Dublin Literature Award. It has been described as ‘a twisted masterpiece’ by the Guardian.

THE VIOLENT CENTURY (2013), described as ‘a stunning masterpiece’ by the Independent, was shortlisted for Japan’s Seiun Award, and longlisted for the IMPAC Dublin Literature Prize. It has been described as ‘Watchmen meets Tinker, Tailor, Soldier, Spy’, and is a wide-canvas thriller, history of the 20th Century, and a meditation on heroism. James Ellroy hailed the book as ‘A brilliantly etched phantasmagoric reconfiguring of that most sizzling of eras — the twilight 20th.’

THE BOOKMAN HISTORIES — comprising THE BOOKMAN (2010), CAMERA OBSCURA (2011) and THE GREAT GAME (2012) — borrow equally from mythology, classic literature, pulp fiction and noir and kung-fu cinema to reimagine and comment upon the Victorian era. They are being reissued in new editions in 2016.

In 2018, Lavie embarked on his first foray into children’s fiction with CANDY.

Other works include the linked-stories collections HEBREWPUNK (2005) and BLACK GODS KISS (2014), the short novel THE TEL AVIV DOSSIER (2009, with Nir Yaniv), short novel MARTIAN SANDS (2013) and novellas AN OCCUPATION OF ANGELS (2006), CLOUD PERMUTATIONS (2010), GOREL & THE POT-BELLIED GOD (2011), JESUS & THE EIGHTFOLD PATH (2011). He also edits the influential anthology series The Apex Book of World SF, now up to 4 volumes, and co-edited the charity anthologies JEWS VS ZOMBIES and JEWS VS ALIENS (both 2015).

Lavie has also worked on graphic projects, including 2012’s GOING TO THE MOON, a picture book about a boy with Tourette’s, with artist Paul McCaffrey, and one-shot comics ADOLF HITLER’S ‘I DREAM OF ANTS’, with artist Neil Struthers. A full-length graphic novel with Paul McCaffrey, ADLER, is forthcoming from Titan Comics.

Tidhar works across genres, combining detective and thriller modes with poetry, science fiction and historical and autobiographical material. Recent media appearances included Channel 4 News and BBC London Radio, and he has several times been a guest in European and British literary festivals. The Jewish Standard said of him that he ‘should be your new favourite writer’ and Library Journal said that ‘his astounding talents guarantee something new and compelling no matter the story he tells.’

GOREL AND THE POT-BELLIED GOD

THE CIRCUMFERENCE OF THE WORLD
- Blackstone Publishing (Audio, TBC)
- Tachyon Publications (US, TBC)