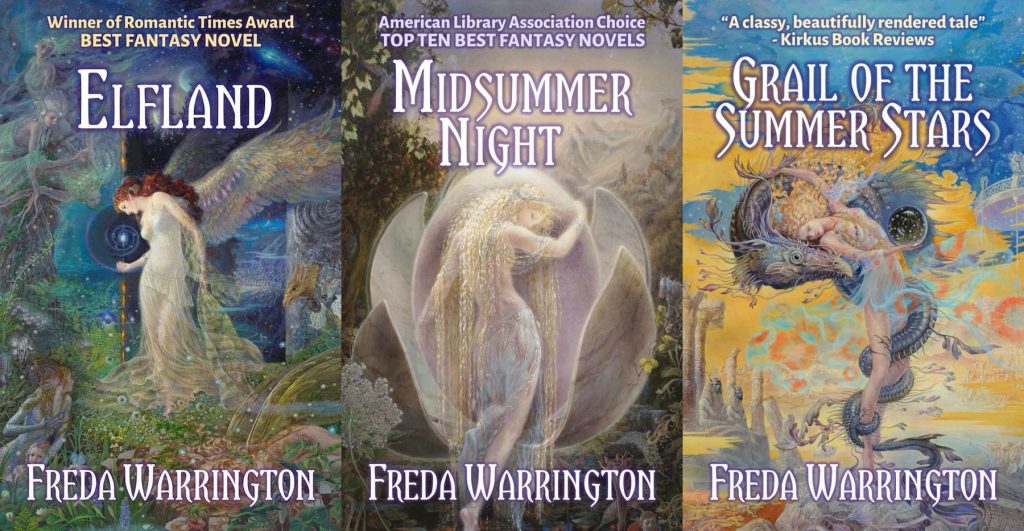 Today, we wanted to draw your attention to the Freda Warrington‘s acclaimed Aetherial Tales trilogy: ELFLAND, MIDSUMMER NIGHT and THE GRAIL OF THE SUMMER STARS.

The trilogy was recently re-issued as eBooks, by JABberwocky (covers above); and is also available as audiobooks, published by Audible, and narrated by Matthew Lloyd Davies.

Here’s the synopsis for ELFLAND…

Rosie Fox is a daughter of Aetherials, an ancient race from the Spiral — the innermost realm of the Otherworld — who live secretly among us. Yet she and her kind are bereft of their origins, because on Earth, in a beautiful village named Cloudcroft, the Great Gates between worlds stand sealed.

Her parents, Auberon and Jessica, are the warm heart of her loving family. But on the hill lives the mysterious, aloof Lawrence Wilder, Gatekeeper to the inner realms. Tortured by private demons, he is beset by trouble on all sides; his wife has vanished and his sons Jon and Sam are bitter and damaged. Lawrence is duty-bound to throw open the Gates for the Night of the Summer Stars, a ritual granting Aetherials connection to their mystical heritage. But when he bars the Gates — haunted by fears of a deadly menace within the Spiral — he defies tradition and enrages the Aetherial community. What will become of them, starved of their essential life force? Is Lawrence betraying them — or protecting them?

Growing up amid this turmoil, Rosie and her brothers, along with Sam and Jon Wilder, resign themselves to living as humans. Yet they know their elders have denied them their birth right, harbouring dark secrets in a conspiracy of silence.

When Sam is imprisoned for an all-too-human crime, age-old wounds sunder the two families… yet Rosie is drawn into his web, even as she fears the passions awoken in her by the dangerous Wilder clan. Torn between duty and desire, between worlds, Rosie unwittingly precipitates a tragedy that compels her to journey into the Otherworld, where unknown terrors await. Accompanied by the one man most perilous to her, she must learn hard lessons about life and love in order to understand her Aetherial nature… and her role in the terrifying conflict to come.

‘This dreamlike, nuanced and sensual novel is reminiscent of the best of early Charles de Lint and is compulsively readable. Rose is a memorable, unique and wholly sympathetic protagonist, and the supporting cast is equally well drawn. The story of Rose and Sam is compelling, enchanting and utterly enthralling. This is simply one of the best fantasy novels of the year.’ — RT Book Reviews on ELFLAND

‘ELFLAND… is an exhilarating, wondrous read. The scope of the imagination is breathtaking, as is Ms. Warrington’s evocative writing… a fabulous, remarkable, literary modern fairy tale. Absolutely recommended…’ — Book Smugglers

‘… unlike the urban fantasy books that have taken over most of the fantasy section, this is old school fantasy. Magic that’s full of awe and wonder. It reminds you why we love this kind of story in the first place… Each book [MIDSUMMER NIGHT and ELFLAND] is a stand-alone volume and an absolute delight… I have a lot of fun with the kinds of fantasy/supernatural books that dominate the field at the moment, but none of them can match a novel such as either of these two — for storytelling that takes you where you don’t expect to go, and for that exquisite sense of wonder that makes the heart of this old reader sing.’ — Charles de Lint

‘… moody and spine-shivering sequel… Warrington doesn’t miss a beat with this sinister, ghostly tale of some of the darker aspects of the Aetherial world and its denizens’ dealings with humanity.’ — Publishers Weekly on MIDSUMMER NIGHT

‘This is the second book in Warrington’s Aetherial Tales series, and while it is only loosely connected to the first volume, it is every bit as evocative and compelling. Gill is an intelligent and prickly protagonist and the mystery at Cairndonan is one of family secrets, great art and magic.’ — RT Book Reviews on MIDSUMMER NIGHT

‘Freda Warrington deftly weaves together contemporary art and ageless magic in this vivid, atmospheric fantasy.’ — Tricia Sullivan on THE GRAIL OF THE SUMMER STARS

‘… A classy, beautifully rendered tale that persuasively builds from low-key beginnings into a complex enterprise with real heft, a rich back story and characters that grow with the narrative. A must for existing fans, while being easily accessible to newcomers.’ — Kirkus on THE GRAIL OF THE SUMMER STARS

‘I really loved it: great characters, terrific story, very moving and involving.’ — Kari Sperring on THE GRAIL OF THE SUMMER STARS

‘If Freda Warrington didn’t write, it would be a crime against humanity. This woman was born to write and tell stories and she does it incredibly well… Warrington has perfected atmosphere and her characters fairly jump off the pages… There’s romance, friendship, betrayal, growth, revelations and much more. Basically, it’s anything anyone could possibly want in a book… [Warrington] know[s] how to write an incredible story full of emotional drama, depth and amazing world building. Freda Warrington doesn’t just write urban fantasy. She’s mastered it.’ — Bookworm Blues on THE GRAIL OF THE SUMMER STARS