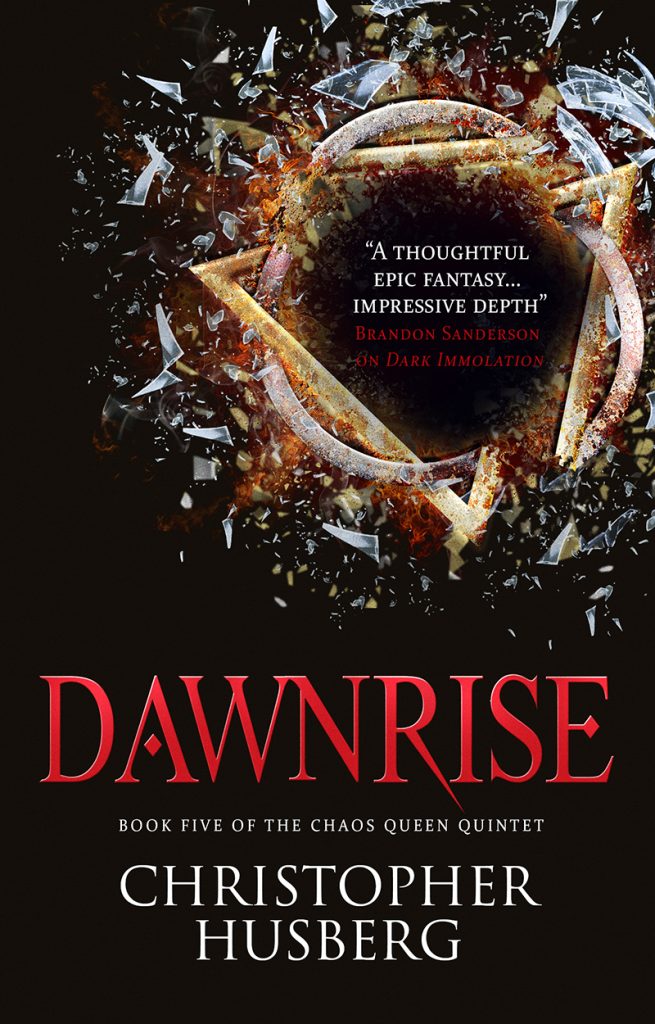 The release of the final novel in Christopher Husberg‘s acclaimed Chaos Queen Quintet fantasy series has been unfortunately delayed until August 4th, 2020.

DAWNRISE is due to be published by Titan Books in the UK and North America. Here’s the synopsis…

Nothing is as it seems.

Sfaera-shattering revelations reveal there is more to the Nine Daemons — and Canta — than anyone could have imagined, and deep in the heart of Triah, a threat that has lurked below the surface for years finally rises, gathering unimaginable power.

Knot, still reeling from a shocking death, tries to put himself back together in time to fight. Two ex-Nazaniin assassins, Code and Kali, form an unlikely alliance. Cinzia, more suspicious than ever of her sister Jane Oden — Canta’s prophetess — rallies as many people as she can to save the Sfaera from imminent destruction. And Winter, the Chaos Queen herself, realizes she must finally choose sides and face the greatest test of her life: finding the humility to seek help.

Deep in the heart of Triah, a threat that has lurked below the surface for years finally rises, gathering unimaginable power. Only the unlikely alliance formed between the two former Nazaniin assassins, Code and Kali, stands in its way.

Characters old and new join forces to preserve life as they know it. The darkest night the Sfaera has ever known is about to end, but whether it ends in daylight or destruction remains to be seen…

Titan Books has published the first four novels in the series, too: DUSKFALL, DARK IMMOLATION, BLOOD REQUIEM and FEAR THE STARS.

Zeno represents Christopher Husberg in the UK and Commonwealth, on behalf of the JABberwocky Literary Agency in New York.