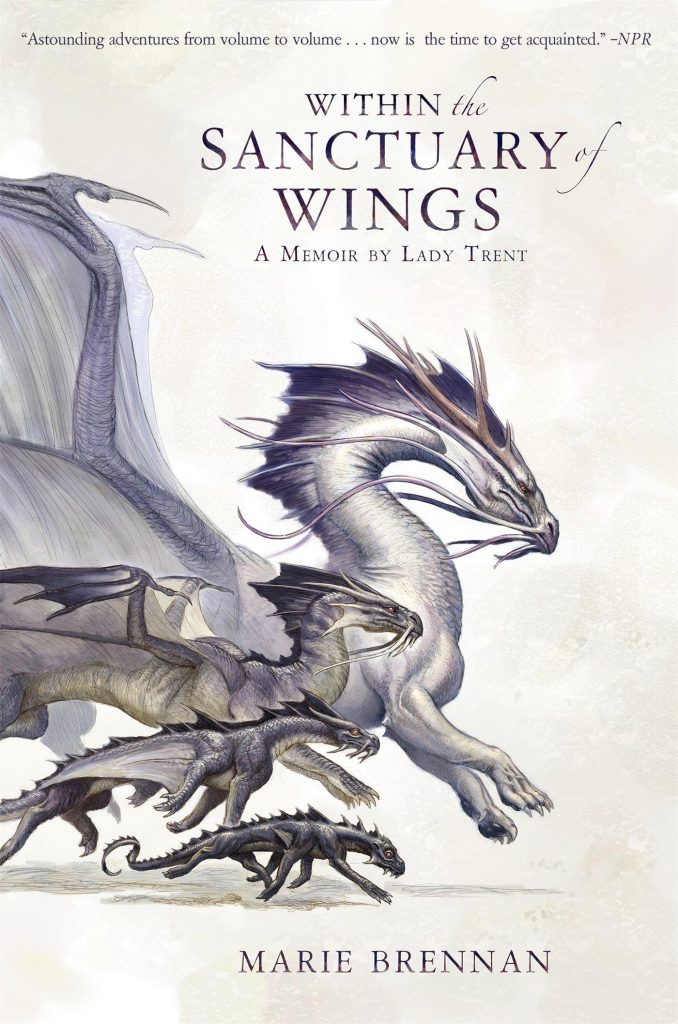 In April, Titan Books will publish the concluding volume in Marie Brennan‘s critically-acclaimed Memoirs of Lady Trent fantasy series! Here’s the synopsis for WITHIN THE SANCTUARY OF WINGS…

After nearly five decades (and, indeed, the same number of volumes), one might think they were well-acquainted with the Lady Isabella Trent — dragon naturalist, scandalous explorer, and perhaps as infamous for her company and feats of daring as she is famous for her discoveries and additions to the scientific field.

And yet–after her initial adventure in the mountains of Vystrana, and her exploits in the depths of war-torn Eriga, to the high seas aboard The Basilisk, and then to the inhospitable deserts of Akhia — the Lady Trent has captivated hearts along with fierce minds. This concluding volume will finally reveal the truths behind her most notorious adventure — scaling the tallest peak in the world, buried behind the territory of Scirland’s enemies — and what she discovered there, within the Sanctuary of Wings.

Titan Books also publish the first four novels in the series in the UK: A NATURAL HISTORY OF DRAGONS, THE TROPIC OF SERPENTS, THE VOYAGE OF THE BASILISK and IN THE LABYRINTH OF DRAKES.

‘Lady Isabella Trent is a wonderfully charming female-lead who is willing to break from the gender roles of the era and do as her heart desires, study dragons… Marie Brennan does an incredible job of writing in multiple voices… Brennan expertly maintains the balance that makes this commentary fun and informative, without pulling you from the actual story. It’s a brilliant touch that brings a level of authenticity to the memoir-style… the interior illustrations, also done by Todd Lockwood, are just as stunning.’ — Fantasy Faction on A NATURAL HISTORY OF DRAGONS

‘Uncompromisingly honest and forthright as the first, narrated in Brennan’s usual crisp, vivid style, with a heroine at once admirable, formidable and captivating. Reader, lose no time in making Isabella’s acquaintance.’ — Kirkus (Starred Review) on THE TROPIC OF SERPENTS

‘The third installment in Lady Trent’s series of reflective memoirs does not disappoint. Isabella’s familiar audacity as she circles the globe in search of unfamiliar dragons – with her son by her side, no less – makes for an enchanting story. And the romantic interest she finds in Suhail is a much welcome addition.’ — RT Book Reviews on THE VOYAGE OF THE BASILISK

‘VOYAGE OF THE BASILISK combines grand adventure with fascinating insights into the principles behind a world that could almost be our own.’ — Locus