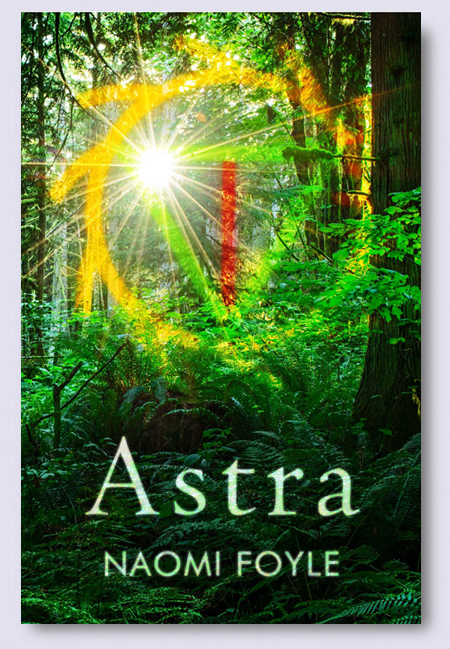 We’re very happy to share with you the stunning cover for Naomi Foyle‘s upcoming new novel, ASTRA. Due to be published by Jo Fletcher Books in early February 2014, it is the first in a new series…

Like every child in Is-Land, all Astra Ordot wants is to have her Security Shot, do her National Service and defend her Gaian homeland from Non-Lander ‘infiltrators’. But when one of her Shelter mothers, the formidable Dr Hokma Blesser, tells her the shot will limit her chances of becoming a scientist and offers her an alternative, Astra agrees to her plan.

When the orphaned Lil arrives to share Astra’s home, Astra is torn between jealousy and fascination. Lil’s father taught her some alarming ideas about Is-Land and the world, but when she pushes Astra too far, the heartache that results goes far beyond the loss of a friend.

If she is to survive, Astra must learn to deal with devastating truths about Is-Land, Non-Land and the secret web of adult relationships that surrounds her.

Naomi’s most recent novel is SEOUL SURVIVORS, which has been receiving some great reviews…

‘If you like gritty, dark, and violent sci-fi, futuristic thrillers, SEOUL SURVIVORS by Naomi Foyle is just the book for you. Foyle works cloning, meteoric disaster, narcotic drug usage, depraved sex, and robotic cyborg creatures into her plot and that’s just to name a few of the topics covered… [a] fresh and exciting book.’  —  Troubled Scribe

‘… takes a cast of quirky characters, sets them down in a convincingly portrayed near-future South Korea, then threatens them with Lucifer’s Hammer, a meteor that is scheduled to hit the planet. Beautiful Sydney Travers has come to Seoul to find her fortune as a fashion model, and finds herself involved with Canadian drug runner Damien Meadows and the silkily deceptive Dr Kim Da Mi, an ambiguously drawn possible saviour of humankind – or a demented megalomaniac. Foyle’s strengths are her impeccable plotting, her rendering of a futuristic Seoul and the depiction of Sydney Travers’ gradualinveiglement in the nightmare of Dr Kim’s cloning experiment.’  —  Guardian

‘A highly regarded poet and performer, Naomi Foyle has drawn on her time living in Korea to produce a detailed and fascinating debut that deals with love, betrayal and an impending apocalypse. A fast paced, riveting story set in an all-too-real dark near future, this is a character driven novel that is not for the faint-hearted.’  —  BSFA