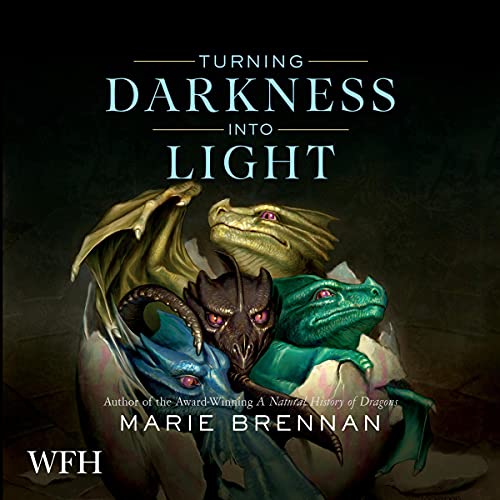 The sixth novel set in Marie Brennan‘s Memoirs of Lady Trent / Natural History of Dragons fantasy world, TURNING DARKNESS INTO LIGHT, is now available in the UK as an audiobook! Published by the Clipper imprint at W. F. Howes, the novel is narrated by Raphael Corkhill and Barrie Kreinik. Here’s the synopsis…

As the renowned granddaughter of Isabella Camherst (Lady Trent, of the riveting and daring Draconic adventure memoirs) Audrey Camherst has always known she, too, would want to make her scholarly mark upon a chosen field of study.

When Lord Gleinleigh recruits Audrey to decipher a series of ancient tablets holding the secrets of the ancient Draconean civilization, she has no idea that her research will plunge her into an intricate conspiracy, one meant to incite rebellion and invoke war. Alongside dearest childhood friend and fellow archeologist Kudshayn, she must find proof of the conspiracy before it’s too late.

‘TURNING DARKNESS INTO LIGHT works beautifully as a standalone novel for newcomers to her elaborate, dragon-centric world.’ — NPR

‘… will appeal greatly to readers who love science and the simple pleasures of discovery and learning.’ — Bibliosanctum

‘Like the related series, TURNING DARKNESS INTO LIGHT is perfect for those readers who ap­preciate a light touch, thoughtful characters, and antagonists who almost but not quite topple into one-dimensional props in a melodrama.’ — Locus

W. F. Howes has also published the audiobook editions of the rest of the series in the UK. The print and eBook editions are published in the UK by Titan Books: A NATURAL HISTORY OF DRAGONS, THE TROPIC OF SERPENTS, VOYAGE OF THE BASILISK, IN THE LABYRINTH OF DRAKES, and WITHIN THE SANCTUARY OF WINGS. 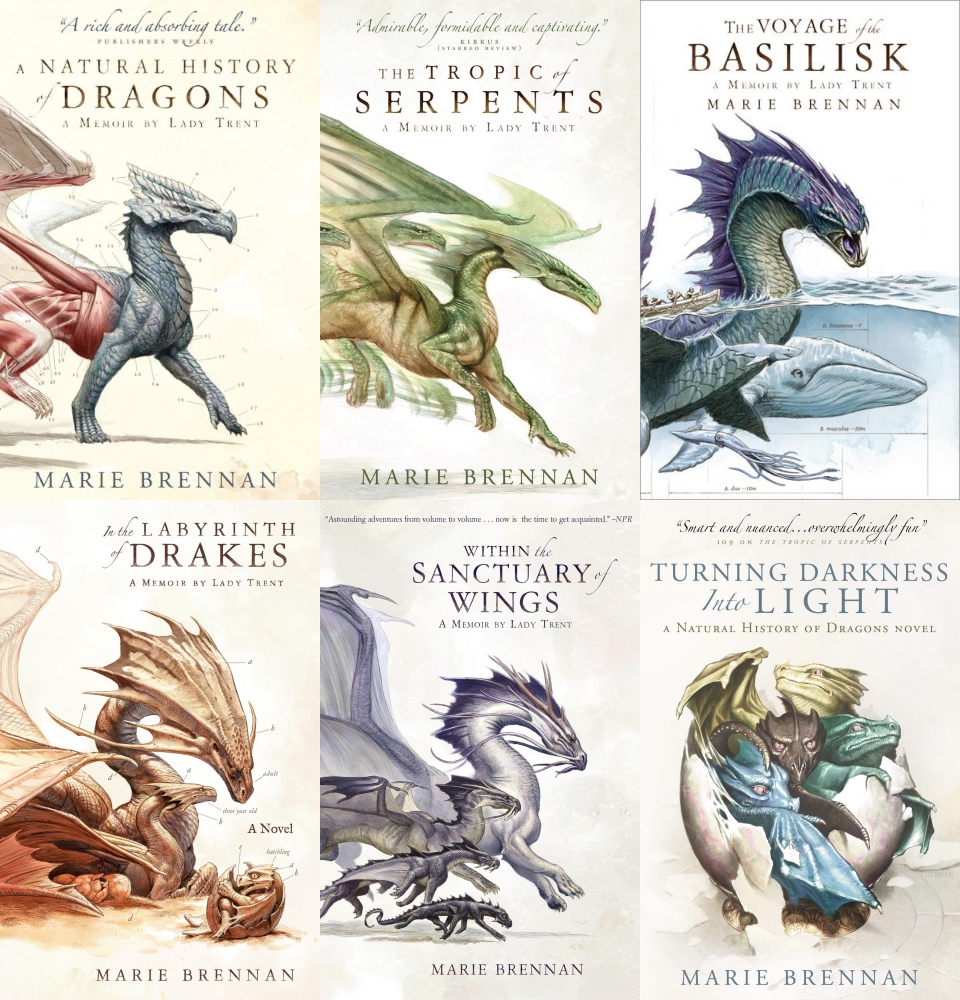 ‘Told in the style of a Victorian memoir, courageous, intelligent and determined Isabella’s account is colorful, vigorous and absorbing. A sort of Victorian why-what-whodunit embellished by Brennan’s singular upgrade of a fantasy bromide and revitalizingly different viewpoint.’ — Kirkus on A NATURAL HISTORY OF DRAGONS

‘A NATURAL HISTORY OF DRAGONS is a tale historical fiction lovers and fantasy fans alike will adore. Isabella is a heroine readers will root for, and fans of Naomi Novik and Mary Robinette Kowal will especially enjoy this book.’ — RT Book Review (4.5/4.5 *)

‘Downton Abbey, but with dragons! … A NATURAL HISTORY OF DRAGONS is a mellow and agreeable memoir, an absorbing and entertaining novel, and I want more.’ — Tor.com

‘What’s truly great about this novel is the seamless merging of fantasy themes and incredibly realistic scientific and social details. Come for the dragon adventure — because there’s a lot of it. But stay for characters whose stories feel as real as Marie Curie’s.’ — io9.com on THE TROPIC OF SERPENTS

‘Where the first volume set the foundation for a series mingling character study with adventure, THE TROPIC OF SERPENTS has the transitional air and faster pace of an episode in a new environment… The Memoirs of Lady Trent feature a bright, observant woman (two of them here) who follows a need to explore the most enduring mysteries of her planet wherever they may take her. Lacking starships or dragon rides, these chronicles have the power of fabulous and historic voyages, along with a wry wit that refuses to accept the standard notions of any era – past, present, or future.’ — Locus (April 2014)

‘THE TROPIC OF SERPENTS: A Memoir By Lady Trent brings dragons into the Victorian world, and flawlessly so… [it] gives fantasy readers another good reason to enter Brennan’s fantastical world.’ — Washington Post

‘A rollicking adventure in which women wearing unnerving amounts of underwear tromp through jungles on dragon-hunting safaris. Really, that should be more than enough for just about everyone.’ — New York Times on THE TROPIC OF SERPENTS

‘The third installment in Lady Trent’s series of reflective memoirs does not disappoint. Isabella’s familiar audacity as she circles the globe in search of unfamiliar dragons – with her son by her side, no less – makes for an enchanting story. And the romantic interest she finds in Suhail is a much welcome addition.’ — RT Book Reviews on VOYAGE OF THE BASILISK

‘[Lady Trent] continues her memoirs of dragon hunting in a gently paced but always entertaining adventure. Fans of Patrick O’Brian’s “Aubrey-Maturin” series protagonist, Stephen Maturin, will appreciate Isabella’s devotion to her studies, and those who like the Victorian feel of steampunk might want to try this variation on the theme.’ — Library Journal on VOYAGE OF THE BASILISK

‘VOYAGE OF THE BASILISK combines grand adventure with fascinating insights into the principles behind a world that could almost be our own.’ — Locus

‘Her two-year round-the-world voyage takes her and her young Jake into dangers and predicaments of almost every imaginable sort, all of which make this book one superbly civilized entertainment.’ — Barnes & Noble on VOYAGE OF THE BASILISK

‘Once again, the work is a delight. Its most appealing aspect isn’t the genre-bending riffs on genuine events so much as the level-headed outlook that people like Lady Trent bring to both fantasy and romance.’ — Locus on IN THE LABYRINTH OF DRAKES

‘The locations are so clearly described and so reminiscent of actual awe-inspiring places, that the book is a joy to read. The scene setting almost makes the reader into part of the story—casting you as the reader back home in her own land who the book is written for, and so putting you into the world as you read it. It’s a clever, exciting, informative book, sure of its characters and its world, and striking out in new directions further into that world in every chapter. May all of them be as fun to read as this one!’ — New York Journal of Books on IN THE LABYRINTH OF DRAKES

‘Brennan delights with this fifth and final memoir… Lady Trent is the perfect heroine for this history-flavored fantasy romp.’ — Publishers Weekly

‘While fans will be sad to leave the series behind, Lady Trent has earned her retirement.’ — Library Journal

‘Brennan brings the fifth and final adventure of the fearless Lady Isabella Trent to a conclusion that is perfectly triumphant and absolutely touching.’ — RT Book Reviews

‘Lady Trent has captivated hearts along with fierce minds. This concluding volume will finally reveal the truths behind her most notorious adventure – scaling the tallest peak in the world, buried behind the territory of Scirland’s enemies – and what she discovered there, WITHIN THE SANCTUARY OF WINGS.’ — Fantasy-Faction (Best Fantasy Books of 2017)