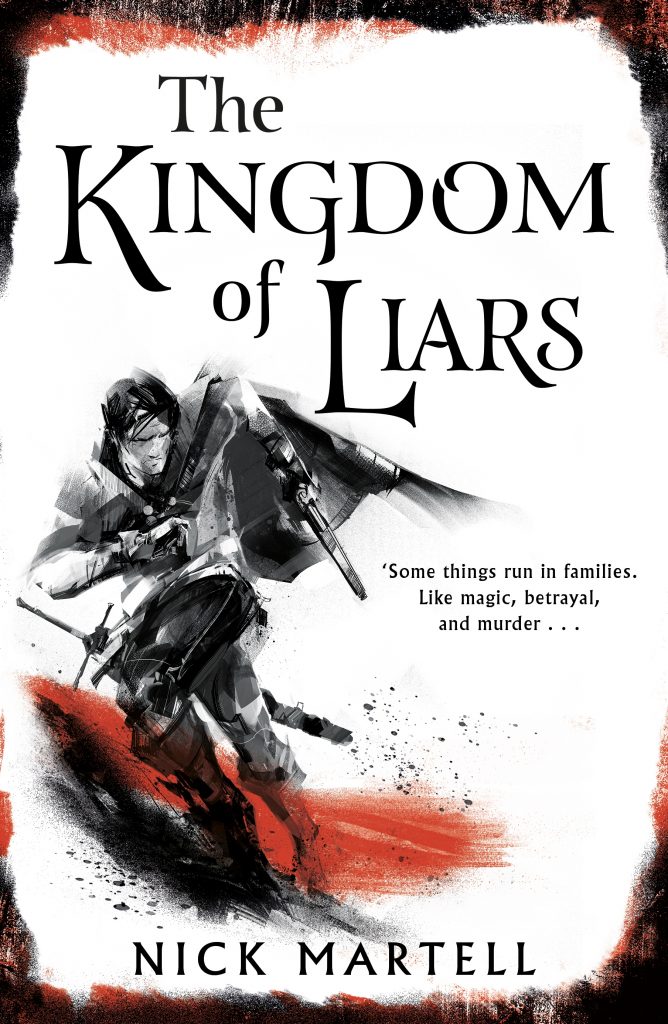 The wait is finally over: Nick Martell‘s highly-anticipated, much-buzzed-about debut novel, THE KINGDOM OF LIARS is out today in the UK! Published by Gollancz, it is the first book in the Legacy of the Mercenary Kings series. Here’s the synopsis…

‘An excellent fantasy debut, with engaging worldbuilding and a good mix between action and character. I thoroughly enjoyed the novel, and look forward to following Nick’s sure-to-be lengthy writing career.’ — Brandon Sanderson, #1 New York Times bestseller author of THE WAY OF KINGS, and The Mistborn Trilogy

‘A symphony of loyalty, greed, family, and betrayal set in an innovative culture!’ — Tamora Pierce, #1 New York Times bestselling author of Tempests and Slaughter, The Song of the Lioness Quartet

‘With a smartly plotted story, great world-building, flawed but fascinating characters and plenty of mystery, THE KINGDOM OF LIARS is a terrific debut.’ — James Islington, author of The Shadow of What Was Lost, The Licanius Trilogy

‘Nick Martell’s debut THE KINGDOM OF LIARS lives up to its name, with so many truths and lies interwoven that nothing is as it seems and surprises lurk across every turn of the page. Michael Kingman — son of a traitor, faithful friend, unfaithful sibling, at turns selfish and selfless as he tries to discover the truth about his father’s treason and clear his family name, Michael’s tale is nothing, if not thrilling. An epic fantasy debut with a lot of promise, I’m excited to see what the future holds for Nick and Michael Kingman!’ — Ryan Van Loan, author of The Sin in the Steel

‘A richly rewarding fantasy that seethes with mysteries, fused with a Memento-style mindscrew of a magic system. This, dear readers, is the good stuff.’ — Jeremy Szal, author of Stormblood

Zeno represents Nick Martell in the UK & Commonwealth, on behalf of the JABberwocky Literary Agency in New York.