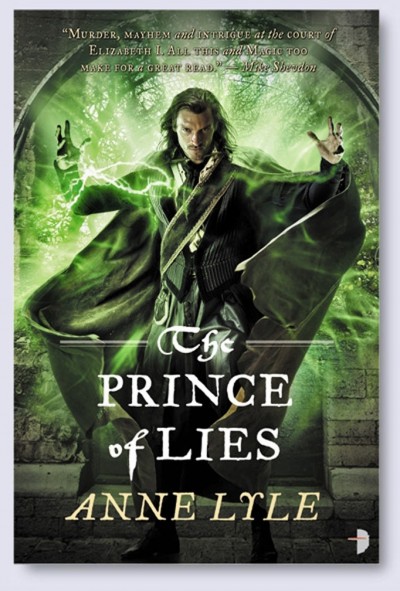 Tomorrow the third instalment of Anne Lyle‘s Night’s Masque trilogy will hit shelves! THE PRINCE OF LIES, which follows THE ALCHEMIST OF SOULS and THE MERCHANT OF VENICE, is published by Angry Robot Books. Here’s the synopsis:

Elizabethan spy Mal Catlyn has everything he ever wanted – his twin brother Sandy restored to health, his family estate reclaimed and a son to inherit it – but his work is far from over. The renegade skraylings, the guisers, are still plotting – their leader, Jathekkil, has reincarnated as the young Prince Henry Tudor. But while he is still young, Mal has a slim chance of eliminating his enemies whilst they are at their weakest.

With Sandy’s help, Mal learns to harness his own magic in the fight against the guisers, but it may be too late to save England. Schemes set in motion decades ago are at last coming to fruition, and the barrier between the dreamlands and the waking world is wearing thin…

THE PRINCE OF LIES is out tomorrow! Here’s some praise for the series thus-far…

‘An outstanding debut and Lyle is certainly a name to watch for the future. I thoroughly enjoyed it.’  —  British Fantasy Society

‘A lively cast of actors and their down-at-the-heel associates contrasts neatly with mysterious powers and goals of the inhuman skraylings as a theatrical competition in the ambassador’s honor offers opportunities for both actors and assassins. With an effective mix of espionage, backstage drama, and mystery, Lyle provides compelling drama in an intriguing setting.’  —  Publishers Weekly

‘Whether you like action, magic, romance or mystery there is something for you here. I never had a reason to put the book down. I am very eager to read the third book in the series.’  —  Mazarkis Williams, author of the Tower & Knife series

‘Full of vitality and some spectacular sequences, THE MERCHANT OF DREAMS is simply fantastic… A more fully realised world, richer secondary characters, an excellent main cast, and a very moving and emotional story… certainly a stronger novel than its predecessor.’  —  The Founding Fields

‘THE MERCHANT OF DREAMS is a fantastic sequel to THE ALCHEMIST OF SOULS… Lyle is a master of blending historical fact and fantastic fiction and she’s only gotten better with her second book.’  —  A Fantastical Librarian