Ian Tregillis, whom we are delighted to represent in the UK and in translation on behalf of Kay McAuley at Aurous Inc.  sees the second novel in his superb MILKWEED series, published this month by Orbit. Already availabe in the US from Tor,  THE COLDEST WAR has already been receiving rave reviews from all corners of the bibliophile internet and was a title that rode consistantly high in many of the 2012 Year’s Best lists. The MILKWEED books  have been described as ‘addictive… enthralling’ (IcebergInk) and as a ‘cracking read’ (AltHist Fiction). The third and final book in the trilogy, NECESSARY EVIL will be published simultaneously in the UK and the US in April. The series has already sold in Spain (DeBosillo) and Poland (Mag) with other territories currently being negotiated.

Fantasy Faction gave the novel 5/5 stars, saying ‘It has so many jaw-dropping moments, so many clever twists and an ending that leaves you hanging desperately for the final part but also ties up the current events. Tregillis is a master storyteller on top of his game… The pace is relentless as it hurtles towards the most epic conclusion… There’ve been some amazing books this year but Tregillis has the top two places in my ‘Best Of’ with BITTER SEEDS and THE COLDEST WAR. It’s going to be a long cruel wait until the final part of the Milkweed Triptych but I have no doubt Tregillis will blow my mind once more.‘ 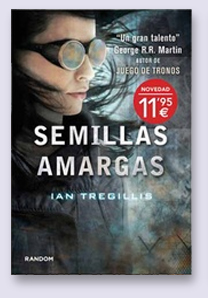 Over at BoingBoing Cory Doctorow was equally full of praise for THE COLDEST WAR: ‘With all the flair he showed in his debut novel, Tregillis continues the tale, bringing to it that same marvellous plotting, immersive sense of place, and above all, wonderful characters… Tregillis is a major new talent in the field, and this is some of the best — and most exciting — alternate history I’ve read. Bravo.‘

And Bookworm Blues were gushing in their praise for the novel, declaring in a 5/5 review that ‘Tregillis not only matched the quality of BITTER SEEDS, but THE COLDEST WAR left it in the dust. Tregillis has obviously grown and developed as a writer, and this brilliant installment in this trilogy proves it.’

If you’d like to see what all the fuss is about Tor.com have an excerpt of THE COLDEST WAR available online. And over on the Orbit site, there’s a fascinating discussion between Ian Tregillis and genre favourite and fellow Orbit author Charlie Stross. Also, fans of the series will be interested in the excellent article about “The Origin of the Götterelektron“.