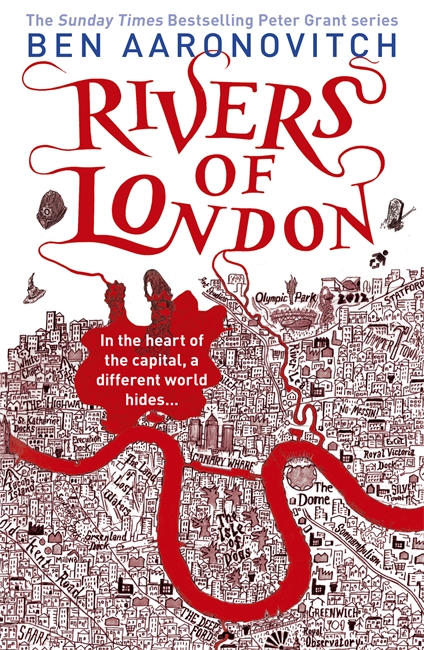 We are delighted to be able to share the news that Simon Pegg and Nick Frost’s production company, Stolen Picture has optioned Ben Aaronovitch‘s Peter Grant/Rivers of London series for TV!

Ben is currently working on the adaption of the first novel in the series, RIVERS OF LONDON (MIDNIGHT RIOT in North America). He will also serve as an Executive Producer on the series alongside Nick Frost, Simon Pegg and Stolen Picture CEO, Miles Ketley.

Announced on Deadline, here’s what Nick Frost said about the novel:

“Suddenly we were in a position where I said ‘there’s this book that I loved’ and it became available, more or less. I was chuffed to bits that I could get the rights to make it into a TV show,” he said. “Everyone wants to potentially find the next Game of Thrones and the chance to turn Rivers of London into an eight-hour movie and hopefully find someone who will financially back that is a real draw.”

Here’s what Ben had to say on the prospect of working with Stolen Picture:

‘Nick Frost and Simon Pegg asked me if I wanted to make Rivers of London with them — you think I was going to say no? Stolen Picture have a reputation for making creator led TV with the minimum of corporate bollocks and the maximum of fun. It’s an opportunity I would be bonkers to say no to.’

Pegg, a writer himself, had the following to say about working with Ben on the project, per Deadline:

‘Often as a writer, you are the absolute bottom of the food chain and treated like scum. As a writer, I understand what it’s like for someone to use you as a springboard rather than use your vision and it’s good to have writers involved as producers because they get it and we want to make a faithful adaptation that is a true reflection of the book.’

‘Ben’s Rivers of London universe is the perfect project for Stolen and the perfect show for now: it’s a suspenseful, funny, scary and magical world but is rooted in the everyday with devious plots, fully drawn characters, river gods and riots. The franchise is going to be a wonderful confluence of Simon’s and Nick’s ambition and humour and Ben’s masterful story-telling to create a truly magical global show.’

I’m sure you’ll all join us in our excitement about seeing Peter Grant, Nightingale et al realized on the screen! We can’t wait!

The series is published in the UK by Gollancz, and in the US by Del Rey (1-3), DAW Books (4-) and Subterranean Press (novellas). The series has also been published widely in translation (the first novel is available in more than 15 countries).